ASA Comic Creator of the Month 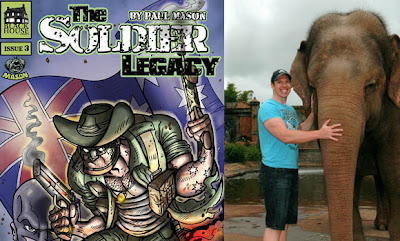 I am humbled to be named this month's Australian Society of Authors Comics Creator of the Month. There are some fantastic past creators listed (and some good friends of mine), so I urge you to see their profiles too. A nice little insight into some of the best creators in this country, and me as a ring-in :P
http://www.asauthors.org/scripts/cgiip.exe/WService=ASP0016/ccms.r?PageId=10289
Posted by Paul Mason at 8:24 PM No comments: 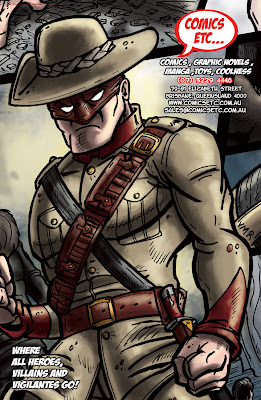 The fantastic crew at Comics Etc. have the Soldier Legacy #3 now available in store and online! These guys were the first retailer to support me and carry my product, and I am very grateful for this. And, the book has a special challenge as it's not only one of the only Australian comics in there, but it also sits alongside all the American books (gulp!). How it'll stand up against MArvel and DC's new 52 for instance, remains to be seen.
http://www.comicsetc.com.au/product_info.php?products_id=16394
So, do me a favour, if you haven't got a copy, support the book and your local comic store :) Remember too, the Soldier Legacy is also available via Black Boox and other comic stores interstate :)
Posted by Paul Mason at 5:55 PM No comments: 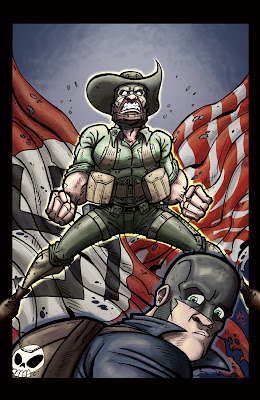 Hey, so a few friends and fans were asking me about the Black House comics panel that occurred on the Saturday of Brisbane's Supanova. Before I get into it, I just want to thank the audience and supporters that were there- I think the head count was in the 50's, so hope you enjoyed hearing about the current books available from the Black House stable, and the future in terms of upcoming storylines and upcoming titles. 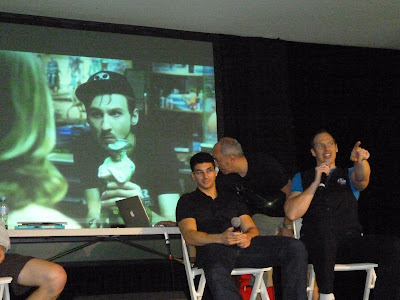 Some of the major highlights for Black House for now and next year include the upcoming 'Terra Magazine' and 'Black House Comics Presents', which I'm really looking forward to, as it will be the company's foray into superhero action (apart from 'The Soldier Legacy' ;D), Jason Frank's "McBlack" has moved under the banner, Chris Sequeira's Sherlock Holmes will have another anthology issue from guest artists (after the current Frankenstein Knights story wraps up), like that of the successful issue 4, plus a Werewolf issue coming up, written and drawn by Phil Cornell, and Bruce Mutard's range of titles.
Anyways, the questions I got related to the current and future Soldier Legacy issues (Issue 3 is out, by the way, and sold well over the weekend), including the Soldier Legacy's current first cross-over with The Dark Detective: Sherlock Holmes series, with the 1880's version of the Soldier meeting the Holmes comic books series anti-villain Dr Nikola. So, below are my expanded notes from the presentation, some I didn't get a chance to touch on, and anything I mentioned at the show and not below, I'm pretty certain it was only points that benefited those not immediately familiar with the Soldier Legacy comic :D
So here we go
Supanova presentation points: Looking from current books to future issues (new Release #3, next, 4 and 5)

· Show the Youi Insurance commercial: Black House Comics decked out Kings Comics in Sydney, with the Ad based on Issue 1 and concept art from issue 2. Production photos, including statue created for shoot, on Facebook page and blog listed in latest issue (Inside cover)

· Soldier Legacy comics: Coming to the middle of the Story Arc, which will lead on the road to the climax. Issue 1 is the Origin story. Issue 2 was essentially Act 1, latest issue in Act 2.

o Young ‘Soldier’: Dangers are beginning to reveal themselves- new allies and enemies emerging, out of his depth (realistically, he began the night thinking it would be a simples ‘stakeout’ on some stolen property in a quiet Brisbane suburban park.) Pieces falling together and it’s not as simple as he first thought.

o The beauty part of the stories is that they are slowly revealing who he is and what makes him tick. As all throughout the current story we see a guy who is trying to honour his grandfather’s ‘Legacy”, he wants to do well, but is unsure if he’s doing the right thing. Even he questions his motives. And we will know by the climax that his grandfather’s example wasn’t the only reason he chose to wear the mask. There must be other motivating factors driving this guy, and the next issue will shed some light on this still-mysterious vigilante.

o Plus the quiet Brisbane Suburbs is just going to erupt with these new gangs on the scene, all wanting the young guy’s head.

o We’re learning puzzle pieces about what drives this guy, who he is, but also what he’s gone through in this war. In issue one, when he is in Kirby's battalion before Kirby saves his life, he’s bitter. In issue 4, we start to learn what made his guy jaded.

o This is hinted in parts in the series that he’s not always the confident Eastwood type- he has these inner conflicts: he missing his family, he misses Australia, but he has this perseverance- he’s honouring his mate and he knows if he stops, he and his fellow soldiers die. But looking at his psyche, he's flawed. He’s not the super powered one man army, he’s a bloke in a mask in a horrible situation. Though we realise he’s out in the jungle by himself, he’ll soon realise that he needs to rely on others for help, like we all do. And there’s conflict in this drama too- Like ‘The Outlaw Josey Wales’- take a guy who wants to operate alone, but slowly finds himself stuck with all these ‘hangers on’, that he’ll realise he needs to survive the mission. What mission is that? It began in issue 2, and we learn more in 3 that it's not a simple "rescue the Aussie POW". It's much more personal than that.

· Plus the action is going to kick up into a High gear- We still got a crazy tank running around in the jungle, and we are moving closer to Saidor (this is where historically, the Aussie meet the Americans), and on to take control of Madang Airstrip, held by the enemy.

· Historical figures will make a cameo in the book- particularly because the guys at the top begin to hear about this bloke running around with his own agenda – this guy isn’t Captain America or Sgt. Fury, he’s an Aussie with a distrust for Authority- the way he sees it, if a mate is in trouble, "stuff the poms and the yanks" running the show.

o Plus we will also see more of Leonard the New Guinea 'Fuzzy Wuzzy' native, and Keiji, the Japanese soldier branded a traitor. Issue 3 begins to touch on their personal journey; I like building on story of supporting characters that aren’t always pushing the traditional, Caucasian hero.

Soldier 4 is aimed at April (in time for The Gold Coast Supanova), with 5 and perhaps 6 coming before the year’s out.

Plus, more to add to the Soldier Legacy timeline with the earlier incarnation of the solider appearing in the current issue of ‘Dark Detective: Sherlock Holmes’, crossing paths with the dreaded and mysterious Dr. Nikola, who’s certainly no slouch in the combat department. I’m very pleased that Chris Sequiera, Phil Cornell and Baden Kirgan have allowed me to play a little in the Holmesian sandbox, and also having Chris help adding to the Soldier mythos.

So there you have it. Short and sweet. I tried very hard not to give away any spoilers regarding the current issue 3, if you didn't get a chance to get int in the show, check with your local comic store, who can always hit up Black House Comics, or them and you can order direct from Black Boox. Brisbanites, Comics etc. will have them in stock within the next week, and I want to thank them again for their support. Dark Detective #7, featuring part 1 of the Soldier Legacy Cross over feature, will be available in Newsagents nationwide ASAP :D
And of course, many more photos (including fan and friend pics in front of that bloody huge 9ft 'Soldier' standee) can be found here at the Soldier Legacy Facebook page (Oh, and the Gene Colan 'Iron Man" tribute cover for #4 is above :D).
Gotta run,
Paul
Posted by Paul Mason at 3:28 AM No comments: