A John Romita 'Easter Egg' a.k.a: "Wow. Actually put something here related to research this year..."

So anyway, forcing myself to get some of my own work done for a change, rather than concentrating on keeping the bills at bay, the final couple of weeks of student assessments for my class (though that's looking like a full Sunday of marking before the massive assessments flood in next week), the art exhibition (which is thankfully sorted, and up in the gallery), trying in vain to stay in some sort of manageable shape for November squad training, and the slowly-churning, crawl-paced concept art for the other post-sdcc thing that's not contributing to this thesis due. But then, I get half a page into reading, and find a cool little point I wonder if others knew about. Enjoy :D 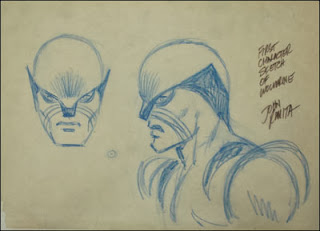 Pouring through some of my research books and articles for my doctoral thesis, I came across a curious little throwaway comment in an 12 year old interview 'John Romita Sr. & Jr. and the art of Grace', with the aforementioned John Romita Snr and Jr., in the Twomorrows publication 'Comic Book Artist' #20, conducted by Jon B. Cooke and transcribed by Jon B. Knutson.

It was something I'd never read before, or seen in other John Romita-focused books/interviews; On one hand it is not surprising, considering the little "easter egg" of sorts. On the other hand though, it came from a discussion on Jack Kirby, who Romita Snr. has brought up in many occasions when discussing as a colleague and inspiration of his. The point of Kirby asking Romita to leave Marvel with him to work on his "New Gods" line of titles for DC around '69/70 has been brought up in many texts too, so it's funny when I came across a little point that fell out of this line of questions. The questions were free flowing on the contributions the 60's "bullpen" contributed to American comic books (specifically, the superhero genre) and Lee and Kirby. The conversation moved to Kirby's relentless creativity, and the ideas that became overshadowed by the next idea, as Kirby never slowed down, never looked back, and kept churning out the new concepts. Discussion moved to the idea that the writer/editors that Kirby had worked with (Simon, and then Lee) were able to provide a "filter" for his concepts, particularly for the readers "…who needed to be fed Kirby less chaotically, more leisurely, so they could absorb this great material…"

This lead to touching on the growing disgruntle feelings Kirby developed towards Lee and Marvel that lead him to DC for 5 years, and the comment was made about Lee/Kirby's fantastic Four.

Generally, it's noted that from towards the last half of their 102 + issue run on the touted comic series, Kirby's new characters and concepts somewhat halted, with the choices seeming to reuse villains and even plots homaging television shows at the time. There were hundreds of drawings and concepts that Kirby hoarded during his later years in Marvel which he ended up using at DC comics. This prompted Romita's throwaway comment that peaked my interest.
Now, Romita was the Art Director at Marvel for years; starting as the guy that Lee called upon to make last minute changes to the artwork in the offices before going to print (while doing the art chores on Daredevil, and then the long celebrated run on 'The Amazing Spider-man', following the then-shock departure of the title by Spider-man co-creator Steve Ditko in '66),  and noted character designer for Marvel in the '70, designing the original look for such characters as the Len Wein-created/co-created Brother Voodoo, Wolverine and Gerry Conway's The Punisher. Romita was the "go-to artist" in this regard, much like Kirby was in the original Marvel comic hero conceptions (and many of Kirby's unused concepts were held onto until Superman's Pal Jimmy Olsen/New Gods/Forever People/Mister Miracle were published, or in the 80's and 90's when Pacific Comics/Topps Comics were using Kirby concepts in Silver Starr  and Captain Victory and the Galactic Rangers.)*

Anyway, there's the long-winded context, here's the except:

CBA: It's Interesting how after a certain period, around Fantastic Four #65  or so, Jack stopped contributing original characters to Marvel and saved his New Gods to pitch at DC.

Senior: If anybody deserved to do that, it was him {Kirby}. I often had that attitude. I once created a line of characters for an abortive Australian series called Captain Australia. I designed the costume for the guy, for an Australian publisher, and Marie Severin, Herb Trimpe and I designed about a half-dozen villains. I created a character called 'The Black Swan', but I didn't include it in the presentation to this Australian, because it was too good and I kept it in my file…

Now, I have a feeling that this might be known among perhaps the older cartoonists as to who the publisher might have been (one who were perhaps doing the Marvel Comic reprints like Newton comics etc.), but it was the first I'd heard of it.
It was particularly interesting for me, since the whole original conception for 'The Soldier Legacy' was to create an Australian action hero of sorts, since superhero-style comics on the "scene" are spotty, and few and far between. Since Marvel UK was able to foster burgeoning British creators with the Herb Trimpe-designed Captain Britain, I wonder what impact, if any, a Marvel-OZ could have had on the local scene and the creators that have worked overseas with "the Big Two" or beyond. Or, would it have even mattered? Given the history of Australian Comics, and the industry "death" in the 1950's by the lifting of the Wartime print import embargo, the smaller-than-the-US, location-diverse population and the cultural difference in our comic book consuming habits, it's very hard to say or speculate the impact of something that never happened. Perhaps some of those reasons (that all speak "no real market") is why it was aborted in the first place. Who knows.

It reminds me of the "Golden Age" Captain America Comics Australian Soldier character 'The Fighting Fool' used only once in 1942:
http://pm-comic.blogspot.com.au/2011/12/fighting-fool-australian-comic-hero-in.html

Marvel's Superhero Squad Cartoon had a token Captain Australia make an appearance in an episode; who knows if it's even based on anything that Romita created years before. 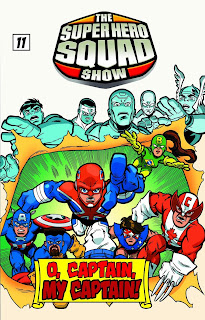 Then again, that crazy guy uses the name. You know, that real-life vigilante in Brisbane…yep. Google him. I'm not even going to bother finding that website link.

Anyways, an interesting point to discuss in the context of a sub-thesis section of my overwhelming thesis. *sigh. Back to it, and marking Student assessments. The mountain awaits...

*As a side note, I always thought it interesting that 'New Gods' were born from the ideas that Kirby had for his original Thor run, in which he planned on the fabled "Ragnarok" or great battle where all the "Old Gods" died. (I vaguely remember reading this wasn't a popular idea; perhaps with Lee, Goodman? will have to re-research that little point, who probably hated the idea of killing off popular characters/series. And, something Kirby would encounter AGAIN with this idea when his original ending to The New Gods series The Hunger Dogs was vetoed by DC when he was able to come back and finish the series in the 80's).

Many thanks to Tim McEwen for the pics of the Len Wein 'Graphic' panel I was kindly asked to host recently at the Sydney Opera House early October. Again, very blown away by Mr Wein's friendly nature, great stories, and the professional and friendly staff of the event: 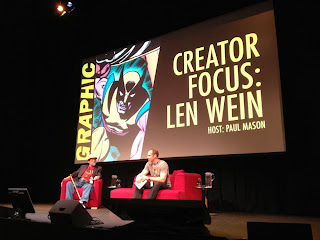 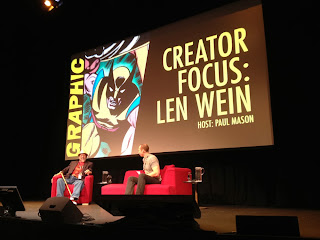 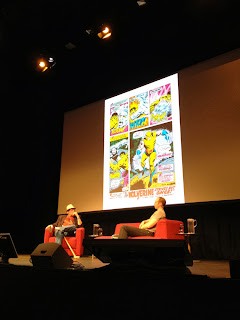 Many thanks to Late Nite Show Host Scott Black and the awesome and friendly cast and crew of Brisbane's 'The Late Nite Show' (shout outs Flash, Amanda, Kris and Biggy!) on 31 Digital for inviting me back to talk nonsense and bullsh**. Had an awesome time, and also great to meet comedian Jacob Lingard!

It’s our 5 year anniversary of The Late Nite Show AND Scott’s Birthday!  Join us for the big celebration as he welcomes back two of his favourite guests!  First up is comic book writer, artist and all around awesome dude Paul Mason (http://www.thesoldierlegacy.com, http://www.facebook.com/soldierlegacy, http://www.pm-comic.blogspot.com, http://pmason83.deviantart.com Twitter: @pmason83) as he comes on to talk about comic coventions, martial arts competitions, and being the said “dude.”
Also on is comedian Jacob Lingard (Twitter: @JacobLingard) to talk about his fantastic new room Fresh Meat (Click Here For Event Information) and to have a few laughs!"
http://latenitemedia.com/?p=1647 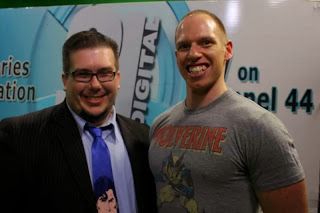 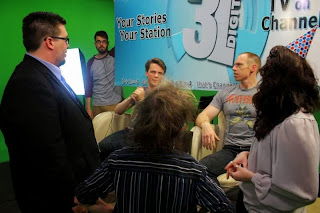 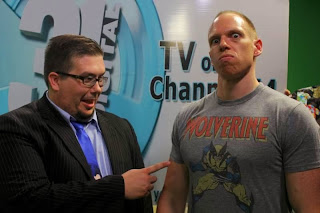 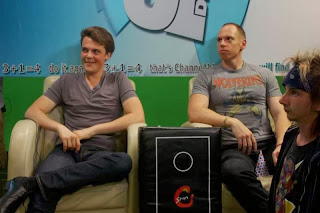 And sadly...a meme was born :P (Thanks to "Number 1 'Soldier Legacy' fan' David A.
Cheers my friend, you crazy bastard ;P)

Posted by Paul Mason at 5:03 AM No comments:

Beginning next week (and opening night on Thursday 24th October if you're in the area): 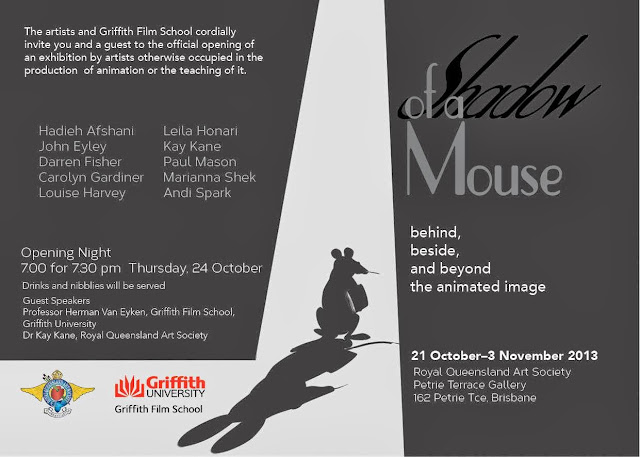 As well as illustrations and sculpture from some very talented Animation/Film School post grad/lecturers, I'll have prints on display at A1 size- using original Comic illustrations featuring 'The Soldier Legacy', pages from 'The New Adventures of the Human Fly', and perhaps 1 or 2 concept art images from 'The Maleficus Seven'...depending on the room ;P

These will be 1 of only 1 A1 sized poster prints that I do plan to sell if anyone is actually interested. Will take photos and post online during the exhibition.

Gotta run. Cheers All.
Posted by Paul Mason at 9:39 PM No comments:

'Graphic' with guest Len Wein: A Great day at the Sydney Opera House 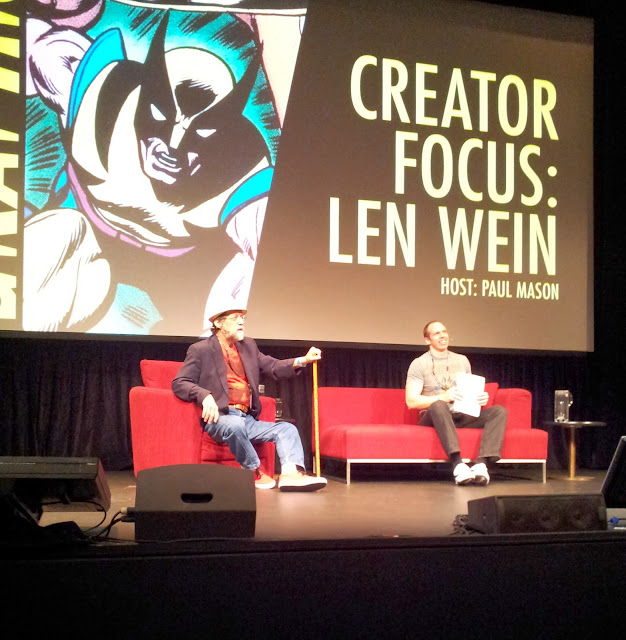 Many thanks to the organisers, staff and support crew of 'Graphic' at the Sydney Opera House for their kindness, good nature and professionalism during last weekend's 'Graphic' festival. I had the great pleasure of being invited to research and chat with Comic book legend Len Wein (The co-creator of Wolverine, Swamp Thing, The new X-men, Marvel EIC, etc.)  on Saturday for his 'Creator Focus' panel. We managed to cover a wide range of his career in the hour, from Gold Key (Twilight Zone, Microbots, Star Trek), to Marvel, to DC, the crazy bullpen, Wolverine, X-Men, Swamp Thing, Jigsaw, Lucius Fox, that infamous pirate hat (;P), Watchmen, X-Men: Animated, and more...there was still a few questions I would have loved to have asked (and was able to chat and get some stories outside the panel that I was very appreciative of), but really, you could spend a whole hour just on Brother Voodoo alone. Apparently, I was able to cover a great deal more than most panels held in the past on his career, according to Len. I was very pleased with the feedback I received, and had a great time. It was great to hear a whole bunch of funny and interesting stories from the man himself, and many stories I didn't find during the research. A sneak peak into his methodology too, and if not for a combination of surprise Daylight savings changeover (we don't have that up here in Queensland...), and family commitments, I would have had a better chance of catching his Sunday appearances. Alas, it was not to be. But, happy for the time I was able to have at 'Graphic' on Saturday.

I won't bore folks with a tonne of badly taken International Fleet Review photos and fireworks (that was on in Sydney the same day; public transport and crowds throughout the city were as big as New Years Eve and the Sydney Olympics...nuts!), but there's a taste there too of the drinks night for the artists on the balcony of the Opera House, while the Navy ships and helicopters lit up the sky. Very cool! Overall, it was nice to be appreciated for the Doctoral studies in Comics; something different again from the Comic illustrating/Writing or Australian team Taekwon-do.

Anyways, gotta run, thank you for the pics taken during the panel. I completely forgot to palm the camera off to someone. 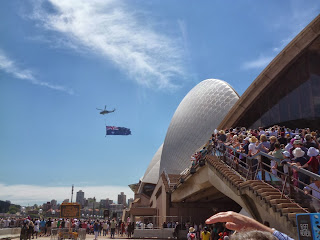 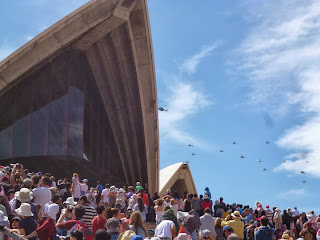 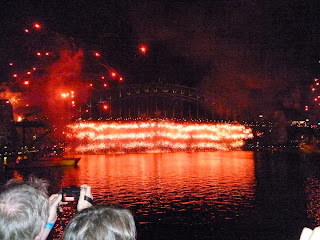 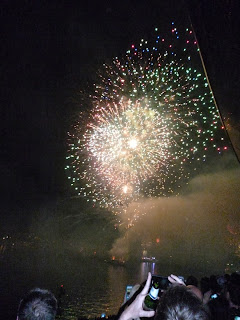 Posted by Paul Mason at 2:57 AM No comments: