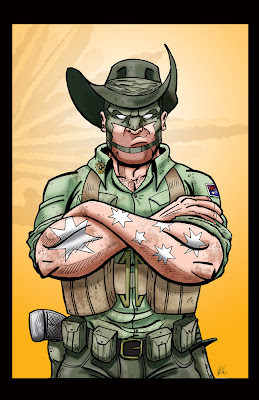 Apologies firstly for the long delay in updates. From the start of July I've been tied up with full time hours at a new job to keep the bills at bay and to make sure my partner Libby and I have the ability to keep a roof over our heads while we continue to study and I work towards my dream career doing something creative. 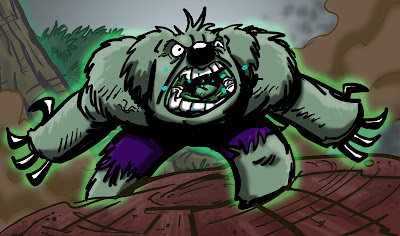 Anyway, firstly if I haven't already posted this earlier, "The Incredible Koala" cartoon animatic for the Sydney Opera House "Graphic" Animation competition made it into the top ten, but unfortunaley lucked out in the last round. I want to thank those who supported the clip and I'm looking to create more work with 'the little Aussie parody' in the future. 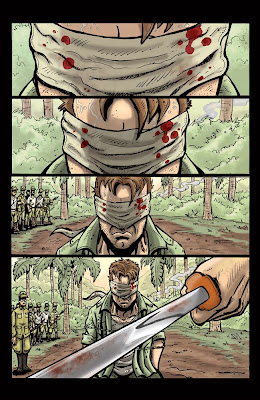 The pencils for "The Soldier Legacy" #2 are completed and colouring has commenced- I hope to have this ready for printing in January for a possible Febuary release at Armageddon Sydney 2011, or by the very latest, Brisbane Supanova in April. I was so thankful for the reception the first issue receive in Brisbane and I'm looking forward to catching up with people there and finding out how they liked the first one. I'm actually looking to have the third issue out by April too, but with a tight deadline and full time work, we'll all have to stay tuned for updates and cross fingers.

For those who missed out this year on getting hold of a copy of issue 1, the 'comic book edition' is now available and I'm happy to say the new gloss cover looks fantastic and the colours have been greatly improved on compared to the first 'special edition' print. (I always felt the dark areas printed too dark, so I added a white layer to knock the blacks back a little and spoke to the Printers.) Thanks to Nova Press on the Gold Coast for a great looking book. There's a 2 page preview of the second issue in the back too ;)
I took a small pile of these down to Armageddon Expo in Melbourne last week; it was all very last minute and I have to give a massive thanks to not only Kevin Scarfe (one of my best friends and Publisher of Cult Fiction Comics Australia/CFCA Indie) but also my good friend and fantasic writer Chris Sequeira for not only convincing me to go, but allowing me to share his guest star table space, along with Black House Writer/Artist Jan Scherpenhuizen. (And thanks to the Armageddon Guys for allowing him to do this). 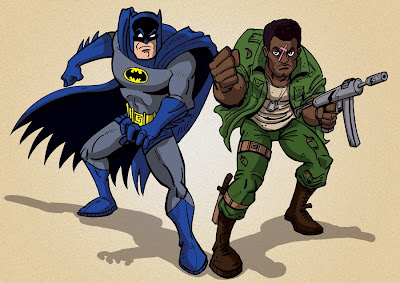 Mr Sequeira was also kind enough to organise DC comic concept/fan image posters that were commission works for Chris's concepts. I still have some of these A3/A2 prints available of Captain Marvel and 'Batman: Brave and The Bold' which I'll bring with me to Brisbane. I was stoked that Chirs printed these huge prints which we gave to Mr James Tucker (Warner Bros. Animation producer of 'Batman: Brave and the Bold') who was a guest at the con, and he seemed to really dig them (no pun intended :P)Oh, that's Batman and 'GraveDigger' for those who weren't sure ;) 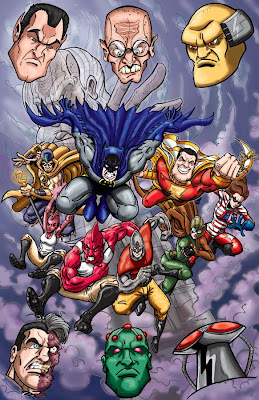 One of the Biggest highlights for me was to have Mr Tucker comment on my work, take a copy of "The Soldeir Legacy' #1 and the posters that we printed. I grew up watching Warner Bros. Animation- from Tiny Toons to Animanics, Freakazoid (does anyone remember this?!) Batman: TAS, Superman: TAS, Justice League and (my favourite) Justice League Unlimited. Some of my favourite epsiodes from these series were storyboarded by Mr Tucker and it was great to let him know firsthand that I enjoyed these in particular. Tecnically, I'm not the offical target audience of "Batman: Brave and the Bold" (we had a laugh as according to Mr Tucker, it's for kids and nerdy fathers who remember the silver age stuff haha), but it's got to be one of consistantly best cartoon series on the box since Unlimited finished. So to meet one of the main minds behind the scenes and also discover how humble and down to earth he is, was an absoloute joy. We chatted about all sorts of things, right down to Jack Kirby inkers, Adam West, old school cartoons, Warner animation and advicefrom a producer's point of view on what I should think about when approaching my own folio work. He was an absolute gentleman and I hope one day to have the ability to get to the states to tour the studio and pursue the elusive dream. 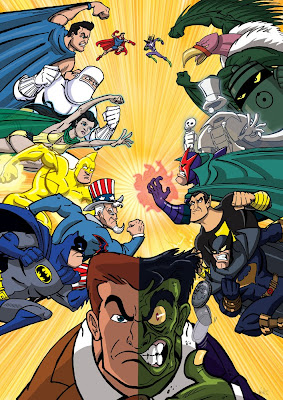 Other highlights were giving copies of the Soldier comic book to Mr Daniel Way (Punisher vs Bullseye, Wolverine:Origins, Deadpool), Mr John DiMaggio (the voice of Bender in 'Futurama' and Aquaman in 'Batman: Brave and the Bold') and Australia and NZ's own Jay Lag'aia (Star Wars, Playschool.) They seemed very nice and hopefully didn't ditch the books when I finished talking to them (!). Mr Lloyd Kaufman and his wife Pat were extremley lovley and also Down to earth people and we had a great conversation about New York and the difference between Kangaroos and Wallabies :)
I also got a chance to briefly speak to My Stewart McKenny and thank him, as he gave me some great advice regarding my artwork in Brisbane and hopefully the positive results will be seen when issue 2 is printed. I really hope those who picked up the first issue enjoyed it enough to give the second issue a shot (this being the first of a four part story). Overall it was a great weekend, caught up with some friends, met some new ones and sold some books and prints.
Well, I gotta get back to it, thanks for listening to my dribble . More updates soon.
Actually, before I go, I just want to say a quick thank you to Mr W.Chew Chan for spending some time giving me some fantastic help regarding my pencils when we caught up briefly in Sydney. Hopefully when I hand him a copy of #2 in a few months he will see I've tried to impliment his advice.
Ok, I just read over this and I've realised there's a lot of 'thank you's and fanboy-ness over the professionals and the industry help and friends I meet; I guess I just appreciate the fact that I can still work towards the dream, receive the advice and help I need to improve and not have to think the day job is the be-all and end-all.
Now I'm done :)
Posted by Paul Mason at 1:04 AM No comments: