Hi Blog, been a while. Most of my comic activities can be found on the blog of my website : www.masoncomics.com.au in the "Latest News" page.

Other than that, this is just a short-ish response to some recent comic news in my woods. A bit of a thought-stream, as I'm buried in marking for Uni, and juggling some stories for Frew. This post was originally going to be a quick facebook message, but got away from me (again, if you count the original word document...) Anyways, here's what I cut and pasted from my post, for those who care. In essence, it was an attempt to spare your newsfeed if you happen to come across my FB page. But if not, it's not too important, just thoughts to get off my chest in relation to this post by Frew.

My thoughts below, the format looks wacky on my computer and a reminder why I don't blog as much as I use to.... anyways, stay tuned to masoncomics.com.au for the latest releases and activity, and all of your Phantom and Kid Phantom needs at Frew Publications: phantomcomic.com.au. Cheers. 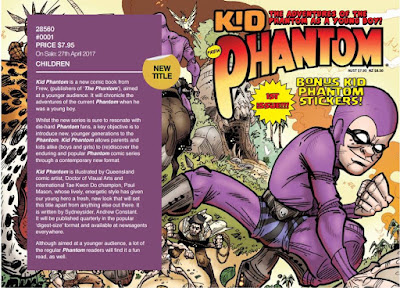 I have been trying to write words in relation to the Kid Phantom comic series announcement to express my thoughts. Here's the jist, edited down mind you (blame the academic and over thinker in my nature), trying not to get into the whole thing, but felt I wanted to say something. With respect, I cover what has been said and my thoughts on it. Regardless of what supporters and strangers think, this comic book work helps support me and my family, so I am compelled to share my thoughts in the face of support, but also possible judgement, and the couple of critics. I know in life, not everyone roots for the story to have a happy ending; some just want to see the Wolf eat Red Riding Hood.

Anyways, laboured metaphor aside, Everyone's entitled to their opinion of course. So here's mine:

As per the comments on the Frew page, The Kid Phantom comic book series is coming to an end, but as the comments also say, we're still doing Kid Phantom, Graphic Novel and shorts etc. Which I am thankful for.

It's a format change surrounding the comic series in its current publishing form, based on business, number crunching and economics, not the quality of the content. The creative team do our very best to bring fun stories for the young to enjoy. So don’t be sad or make too big a deal out of it; As indicated in the comment, we’re still doing the work. I’m actually pleased at the upcoming opportunity to flex into different space.

Perhaps the sadness comes from the loss of the single issue format. It would have been great if it caught on; "A rising tide raises all boats" would have perhaps meant good things for more locally-made Australian titles or start-ups to hit news stands. C'est la vie... 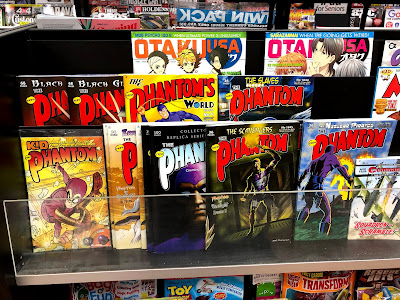 Single issue floppy comics is a roll-the-dice prospect that even the multinational conglomerates overseas struggle to get right (books get cancelled sometimes before release, mostly mid run (like this), the average series goes 4-6 issues; even creative teams drop out; it’s comics.
Sales-wise, I could do a thesis on it based on decades of American comic sales material (I did touch on a little in a chapter of my thesis in 2015). Aussie comics, well, it's 99% here-say and Wild West frontier wilderness to ever find those credible numbers outside of G & G newsstand Distro. I could say at a show for instance that I'm "Sold out", but how many did I take? 10? 50? 100?). The fact that we had 2 years, and (as I was told) thousands sold per issue in Australia is a good thing, but when you consider Kid Phantom is the only 100% developed-locally title, with no reprint material to draw upon, licensing, production, packaging, distribution (and a tough distribution at that; how many other comic books are on the newsstands? Both Marvel and DC ceased newsstand editions years ago. Comics in Australia are considered "invisible" to most, which is why what's left needs supporting, and not be taken for granted)... given these considerations off the top of my head (plus I imagine more than I know as well), I understand why it was not therefore getting the sales it needed, and I'm ok with the business pivot.

As an aside, comics also has a recent history of a portion of its readership wanting things to stay the same. Or even laugh, wish ill will or be thankful for a thing’s failure… Really? Pop culture fans can be strange. It's as though they'd rather see a thing die off than continue.

I know running shoe companies make kid shoes or different colours I don't like or that don’t fit me; doesn’t mean I hate the shoes I don't like, or don't fit, or think they’re spoiling the “good name” of running shoes...

Anyway, you may see the odd comment or two on social media deriding change, new attempts at audiences, and other economic factors outside of anyone’s control. In business, you be proactive, you try new things, you recalibrate, or die.

As I've said from the start, noone is burning the original comics (I love them too), they’re there for all of us to enjoy, but also note to the potential new readers, the old comics (at the moment) mean very little to them, until they find ‘their’ entry point. It’s win-win if they dig it. It could be the next new thing. In fact, putting the new stuff in a special, along with other stuff might be the very next thing that works a treat. When I was a kid, I didn't like the work of any of the classic artists I love and appreciate for their delineating and storytelling abilities now.

Anyways, Let’s see. The same that was said about the comic when it first kicked off was the same for Robin, Superboy, Jack Kirby's work, etc. etc. so again I have to teach my brain to ignore the couple of people with a problem, and focus on the people who have read them, and have liked it, or have genuine love and support. A life lesson from comics.
I learnt a great deal along the way in terms of my own work flow and drawing efforts. I think there was about 230+ pages I scribbled and coloured in the space of couple of years just for this book, so I’m forever grateful for the trust in us to deliver the stories we did in the single issue digest format, and play in a unique corner of The Phantom sandbox, as well as doing something that I love and be able to pay some bills in order to do it. 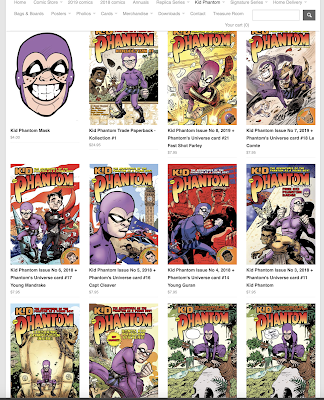 Thanks too to the conventions, newsagents, comic store owners, Griffith Uni media dept, ABC News, 4BC radio, Courier Mail, Gympie Times, Chronicle Chamber.com and Geek Syndicate.uk for the interviews, reviews and interest taken along the way on what we were doing. Australian comics is a beast of a thing to get any support at all, particularly the little bit of mainstream press that we managed to get at the times we did. Thanks to my collaborator, contributors, the readers, and the couple of peers who actually cared and offered support, otherwise I would have packed it in.

I am proud and thankful of my work with Andrew, the trust Glenn and Frew has given me, the readers who have supported it, and the opportunities it's created, including the boardgame, short film, merch, etc.

Roll the dice, Frew. I love writing and drawing the Phantom (the best character in comics), will be continuing to write and draw for the primary Phantom title, and draw the Kid Phantom as long as Frew want me, and the readers like the work.

Thank you for your support. We march on.
As you were.

Posted by Paul Mason at 8:56 AM No comments: