Listen up, Soldiers!  Brisbane Supanova Floor plan is now available online at http://www.supanova.com.au/news/brisbane-2012-event-guide/
New buildings while the RNA gets a revamp, so better familiarize yourself via the link.

If you're interested, you'll find 'Soldier Legacy' comic books, pinups, and I'll be sketching all weekend at table 'F' (highlighted in Pink) opposite Kings Comics in the Comic Creators section (Click the images to enlarge here.) 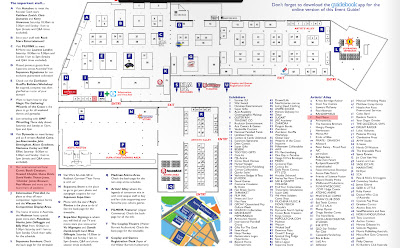 Oh, and to my surprise, and thank you to the fantastic Supanova organisers, I'm on a panel (!) with the awesome James Brouwer, the artist on the award-winning 'The Deep', published by Gestalt, and written by the international goal-kicker writer, and gentleman, Tom Taylor. The Panel is entitled 'Domestic Drawing Dynamos!', on Saturday 10th at 4:20pm in the Supanova Seminar room. Very humbled, and excited. 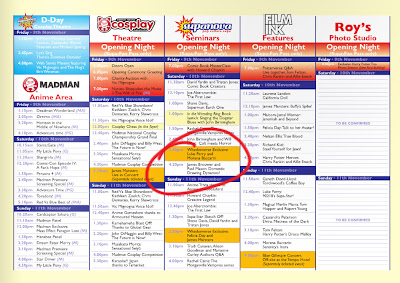 (I'm also digging the idea of the David Yardin/Tristan Jones panels too. Sunday's one looks like a lot of fun.)

More updates on the Show as we get closer. In the meantime, Thank you, Thank you, Thank you to all the supporters of 'The Soldier Legacy Comic Book' Facebook page- we cracked 1000 likes! A small reward when issue #5 is off to the printers at the end of this week.
Posted by Paul Mason at 8:20 AM 2 comments:

Less than a week left to put this issue to bed. Last preview page before then (I think... ;P). 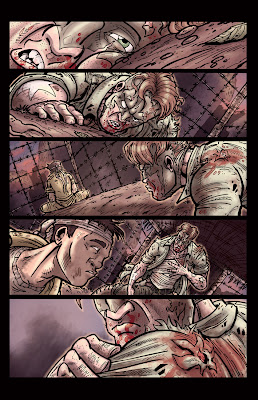 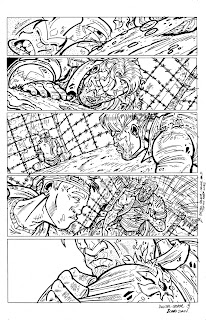 The Black and white version was previewed a few weeks back, thought it might be nice to reveal a coloured version, just so you get an idea of how the final issue is shaping up.

Gotta run.
Posted by Paul Mason at 8:28 PM No comments:

Not far away from completion of this issue, but it's really "back to the wall" week. This issue is, I'd be fine except I have a massive seminar/squad training/tournament fighting weekend I have to attend, the issue is due mid next week, and student assessments are coming in that has to be marked...*phew. Full on stuff.

In the meantime, a Kirby Riff in the "splash" panel for the backup feature for Soldier #5; when scrambling to thumbnail this page this morning, I kept coming back to this composition which reminded me of one of Kirby's DC Comic tenures: "Our Fighting Forces ft. The Losers" run from the mid 70's. The particular issue was actually his first one for the series, with the title "Kill me with Wagner". The back up feature might get a similar sub-title for the issue :P. 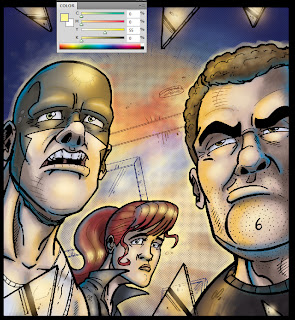 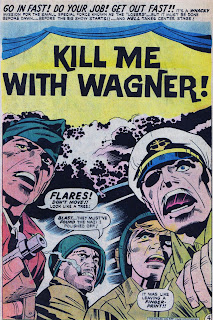 Anyways, still messing with the colours, it's 4am and I've run out of steam. Will have to re-evaluate with weekend (yes, will have to drag the work with me to get it done>)

Good news is too, I believe Soldier Legacy trades and issue 4 are getting reprints by Black House Comics for Brisbane Supanova (I've been out for a while, so that's a relief) and, prints are sent. More info for those who give a damn soon ;P 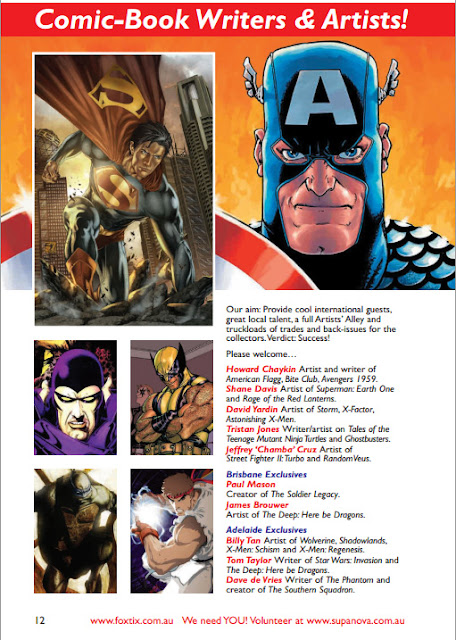 What an awesome lineup, that I'm honoured to be a part of :D Really looking forward to being a guest in my current home city of Brisbane, where 'The Soldier Legacy' is partly set, and where the series started, about 2 years ago.

The Supanova expo magazine can be found online in its entirety: http://networkedblogs.com/DyHqh?a=share

Posted by Paul Mason at 7:18 PM No comments:

Random colour panels, some finished, some in progress, taken from 'Soldier Legacy #5', still in progress, but to be wrapped up at the beginning of November. Thank you too, to all the new followers on the Facebook page! If you haven't seen the website, why not swing over a take a look, yeah? http://thesoldierlegacy.com

Hope to see old and new faces in a few weeks at Supanova Brisbane! :D http://www.supanova.com.au/guest/paul-mason/

Posted by Paul Mason at 4:43 AM No comments:

Anyways, page 1 almost there, flats going down for 2 before I drag myself to bed. Hopefully before the sun comes up ;) 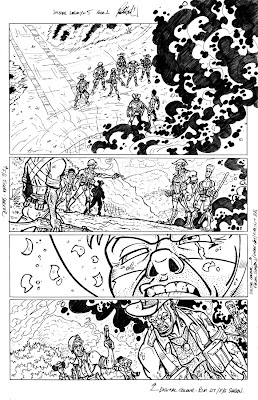 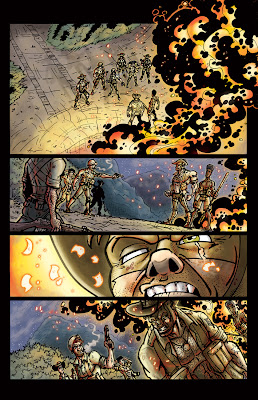 This will be out for Brisbane Supanova Convention in a little over 4 weeks :D http://www.supanova.com.au/guest/paul-mason/
Posted by Paul Mason at 7:28 AM No comments: