Section from Confirmation: Application of research

Below you will find a snippet of the examples I gave in my Doctorate confirmation presentation of the application of basic panel layout through researched artist's works. The first example is from 'Sgt. Fury and His Howling Commandos", penciled by Jack Kirby and inks by Dick Ayers.
The irony is that in my example of the panel layout (from 'The Soldier Legacy #2') was not intentional, but I came across the page and realized that through reading piles of 60's reprints I naturally gravitated towards these layouts in my attempts at storytelling. Basically, those larger panels are great for establishing shots. 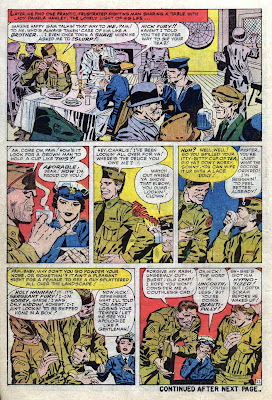 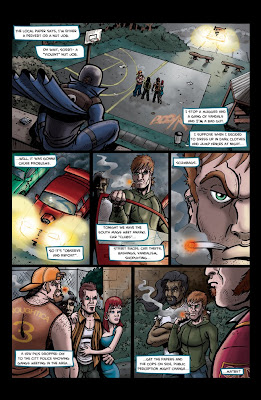 Same goes for this example from the original 'X-men' series penciled by Jack Kirby and inks from Chic Stone. The larger panel establishes the scene, and the proceeding smaller panels delve into closer aspects within the scene. 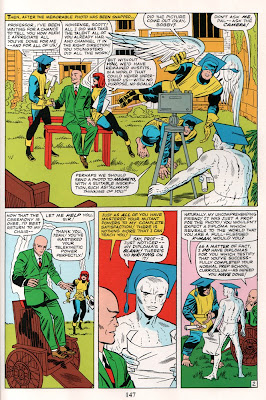 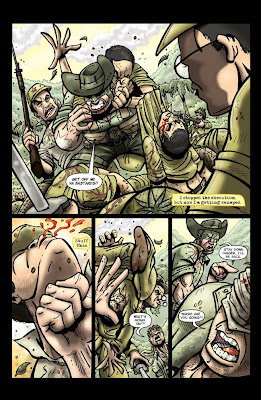 Well, that's enough out of me tonight. Very tired from work. I actually had my Doctorate confirmation yesterday, extremely nerve-wracking, but was very grateful of the help my supervisor Andi Spark gave me before and after, and for the support and feedback from my other supervisor Paul Cleveland. External examiner Daren White was a nice surprise, (writer of "The Playwright", illustrated by Eddie Campbell, writer on such works as 'Batman', Legends of the Dark Knight', Jason Paulos's 'EEEK!' and a ton of other books I will be getting my hands on one day.) it was great meeting him and his feedback and support was very uplifting for this battlin' aspiring penciler . Overall, it was very positive and apparently it went over well despite the fact I was basically talking comics the fine artists for nearly an hour. Sorry all ;P
Anyways, it has reinforced in my mind that if I can't crack the industry, I would love to lecture at a university level. Time and fate will tell.
Posted by Paul Mason at 10:51 PM No comments:

The Incredible Koala in Solider Legacy # 2 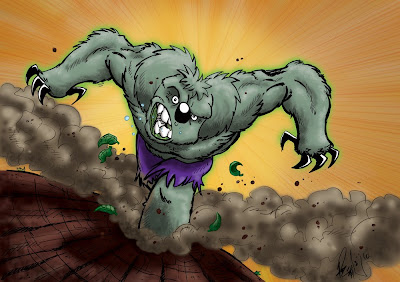 Here is the Pin up for my Jack Kirby-inspired Hulk parody "The Incredible Koala" which featured in an ad for Brisbane's Comics etc. (www.comicsetc.com.au) in issue 2 of "The Soldier Legacy". Got a big Kick out of drawing this character again after doing the animated version for the Sydney Opera house's GRAPHIC Animatic Competition last year. Thinking once the first Soldier story arc is over, I would love to do a back up feature with the 'origin' of this little guy in comic form. I've gotten as far as thumb nailed the first few pages, but that was it. One day... *shrug. Keen eyes (or those that care) might notice that the 'Mason' logo featuring on the front of Soldier Legacy #2 has the Koala head ala the MGM lion. Yeah, no point really. That's all :P
Anyways, gotta run. If you want to see all that nonsense from last year, you can go here : http://incrediblekoala.blogspot.com/ and I should get around to uploading the 2 part animation I did for it soon. (and maybe complete part 3).
Posted by Paul Mason at 10:26 PM 2 comments: 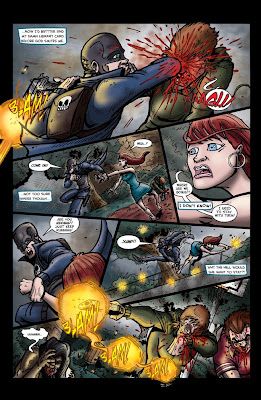 Page from #2 by me.
I have had the privalege recently of chatting on twitter to one of my all time favourite colourists in comics, Dean White. This man has this great painted colouring style that hasn't got me this excited over a colourist since John Higgins. And even then, as primarily considering myself a Penciler, I have never been one to look outside the pencilers and certain inkers that have inspired me over the years (and still do), be it their visual style or storytelling methods. See, I liked John's work on WATCHMEN, and got a chance to meet him in person and show him my work on the early pages of issue 1 after his lecture at my uni. He made me realise to not be afraid of using a broad range of colours, or be scared of colouring in general, but to understand colours and how they work in the context of the project. 'Fantastic Four" #1 painted cover by Dean White. Drawn by Jack Kirby 1961.
I was first introduced to Dean White's colours through his work on John Romita Jr's/Klaus Janson's work on books such as BLACK PANTHER, AMAZING SPIDER-MAN, DARK REIGN: PUNISHER and the recent AVENGERS run, but also as a huge 60's Marvel fan (as you guys already know thru my archived posts), I noticed and really enjoy his extremely faithful/beautiful colouring/painted works of Kirby/Ditko/Buscema's classic covers on the front of MARVEL MASTERWORKS. 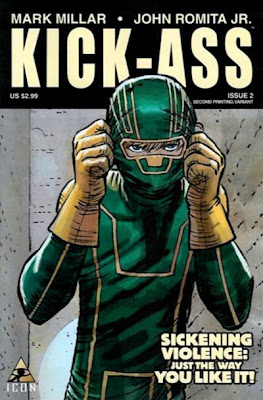 'Kick-Ass' Cover by John Romita Jr, Tom Palmer and Dean White.
He also worked on John Romita Jr/Mark Millar's 'Kick-Ass', an awesome and clever satire/superhero book which I discovered AFTER I becgan working on the masked young grandson of 'The Soldier' ...damn. I'm always worried mine comes off as a copy, as I was inspired by the realism with the vigilante street-based heroes in Steve Ditko's AMAZING SPIDER-MAN and Wally Wood's DAREDEVIL. After reading 'Kick -Ass' there are many differences (thank god) , such as being set in two different countries, different settings, and the motivations/driving force behind the character's motives. For example: Dave in Kick-Ass is a teen who wants to be a superhero (loves the idea), dresses in the garishly bright costume, doesn't know how to fight or what he's getting into until later and goes through the ringer. Awesome stuff, great drama as I guess you never want your character to cruise through a story safe and confortable Mark Millar always pushes his characters to the brink (don't believe me? Read WOLVERINE: OLD MAN LOGAN, THE ULTIMATES series 1 and 2, WOLVERINE: ENEMY OF THE STATE or CIVIL WAR, and tell me they all had a good time ;P). 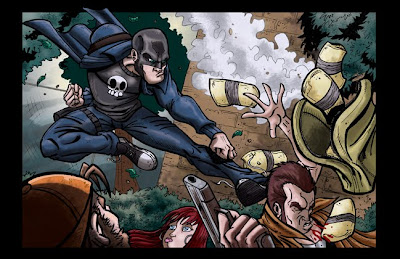 Page from #2 by Me.
When I wrote in the grandson story in the modern Brisbane/Australian Suburban setting, (not knowing anything about Kick-Ass), I made the character approach the vigilante idea more practically. A young man, not a soldier himself, but someone who's obviously honour bound somehow (delveloped in his upbringing) to make some sort of difference in the lives of even total strangers (more on this in later issues if I'm smart enough to pull it off :P) His grandfather wore a mask to 'keep lives safe' in WW2. His local neighborhood wasn't that safe anymore. He wanted to honour his Grandfather's legacy, but only engages conflict when absolutely necessary. (Such as attempting to save the unarmed woman in #2) He wears street friendly clothing- dark colours so not to be seen (thanks Batman ;) ) and could easily strip off the mask and zip up the jumper jacket if need be. Also, as later issues will show more in depth (*Spoiler*...well, not really), he is a trained martial artist. Not in the mystical manner, but an Aussie kid who grew up studying and training and continues to do so in his young adult years. But even then, realises he's not exactly Bruce Lee, so relies on surprise-not announcing he's a hero ready to save the day. Sure he does some fantastical stuff like that flying side-piercing kick you see above, but you have to embellish a little in comics, right? But all this isn't to say that this guy won't be put through the ringer too. If you've read the 2nd issue, a simple task of neighbourhood watching becomes a huge problem for him which will begin to snowball rather quickly when #3 comes along. 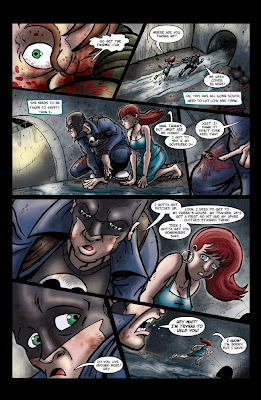 Page from #2 by me.
Anyways, I'm getting off track. The whole point of this to touch briefly on the visual approach I took, and it was Dean White's colouring that inspired me in scenes for #2, which I have posted here. Not that I got close to his application, but I do hope the influence can be seen.
Yes, that was the point to all that rambling.
At the end of the day, I am researching medothologies of various artists for my course, be it in storytelling visually, story writing methods/structure, penciling, poses, camera selection, composition and colour. I have no illusions: colouring isn't my forte' and it is difficult for a guy that just wants to draw pencils, but I believe a competent understanding of each mode of production is necessary to put out a product in the Aussie climate battling against a small industry structure/existence, small Aussie readership (in comparison to overseas) and superior American products from my favourite juggernauts.
Thanks for listening, check out more of Dean White's wonderful colouring here: http://deanwhite.deviantart.com/ . Take care all, more from me later as I start to put up some of my research for my degree.
(All pages in post copyright their respected copyright holders.)
Posted by Paul Mason at 3:12 AM No comments:

The terrific people of Ultima-Java did a little video of me at the fantastic Supanova convention in Brisbane this year. I apologise in advance for the hoarse throat (talked waaaay too much that weekend) and the rambling (you can tell we really rehearsed this, yeah? ;P)
You can see it on their website here: http://www.ultima-java.com/?p=1134 and while you're there check out the other videos and web comics. They previously did a video with Cameron Davis and the talented Greg Capullo, with my friend Jan Scherpenhuizen next week.
Thanks guys, more updates shortly. Been busy with some illustration work and catching thieves as usual. Soldier Legacy # 3 is just about finished in terms of pencils so previews to come, watch this space :)
Posted by Paul Mason at 10:30 PM No comments: