FREE COMIC BOOK DAY! and "Where can I get the latest Soldier Legacy books?"

'Gifts for the Geek' in Geelong now stock Black House comic's 'Soldier Legacy' comic books, bar the latest Strange Tales book that I sold out from the GC. But- I have found a stash at home which I will be bringing with me this week for FREE COMIC BOOK DAY!

Yes, the awesome crew are flying me down to join good mate and comic illustrator Paul Abstruse for a day of craziness, free sketches and other stuff at their awesome store in Geelong, Victoria. See you there SATURDAY MAY 4th! http://www.giftsforthegeek.com.au/

The latest Soldier Legacy comics post- OCC and Supanova can now be found at Kaboom Comics in Toowoomba, QLD : https://www.facebook.com/pages/Kaboom-Comics/115137808869?fref=ts

Posted by Paul Mason at 9:22 PM No comments:

Very sorry, quick updates here, I'm super busy, just got back from a Takewon-do Squad training weekend, and have much to do, In the meantime, a number of things dropped online while I was away, so let's get down to business.

- Geek Speak released their first interview from the recent Gold Coast Supanova (20-21st April 2013), with me, and I spill some beans of some current work I'm doing, thanks to the good folks overseas; including Mr Goldmann, Mr Brewer, Mr Aushenker, Mr Babinski, and good mate Mr Sequeira. Look out of more stuff from the expos here soon, I have a few people to thank and photos to drop on the blog.


- Pikitia Press did a quick question to good mate and fellow comic creator Jason Franks, asking us about 'Productivity and motivation'. Since this is a huge thing in my day to day, week to week routine, I hope some of you get something out of this, not just from a comic-making sense, but in whatever activity you're trying to do well, and goals you're trying to reach in life:

And thanks for the recent mention in 'Paper Trail' for April 21: http://pikitiapress.blogspot.com.au/2013/04/paper-trail_1531.html

- Whatcha podcast just released their latest episode entitled "Whatcha Anzac-in"- in which they pay tribute to our Anzacs, talk all sorts of pop culture, and announce the winner of their 'Soldier Legacy Comic Book' competition: http://whatchapodcast.podomatic.com/entry/2013-04-28T01_36_28-07_00 They were also kind enough to review Chris Sequeira and I's 'Soldier Legacy's Strange Tales #1' and gave it '2 thumbs up!' Thanks Dean! (Jump to 33:20ish)

Big, big thanks to Nath, Dean and Michael for their enthusiastic support!


- More great news regarding Andrez Bergen's 'Who is Killing the Great Capes of Heropa', featuring a little mention of me and the image I did for the novel; Cheers again, Andrez :D
http://www.shelfabuse.com/news/comic-news/andrez-bergen-who-is-killing-the-great-capes-of-heropa/

There is also a 'Southern Cross" drawing competition here:
https://www.facebook.com/notes/who-is-killing-the-great-capes-of-heropa/southern-cross-the-character-design-competition/561622017193341

UPDATE: Brisbane's local channel '31 Digital' just uploaded their Supanova special episodes, where I was interviewed briefly by 'Doctor Who'. Many thanks to Kris and the Crew, who I saw and caught up with on the Gold Coast last weekend as well, and very much appreciate their support:


That's it for now, Diggers.
Chat soon, and thanks again!

Posted by Paul Mason at 8:48 PM No comments: 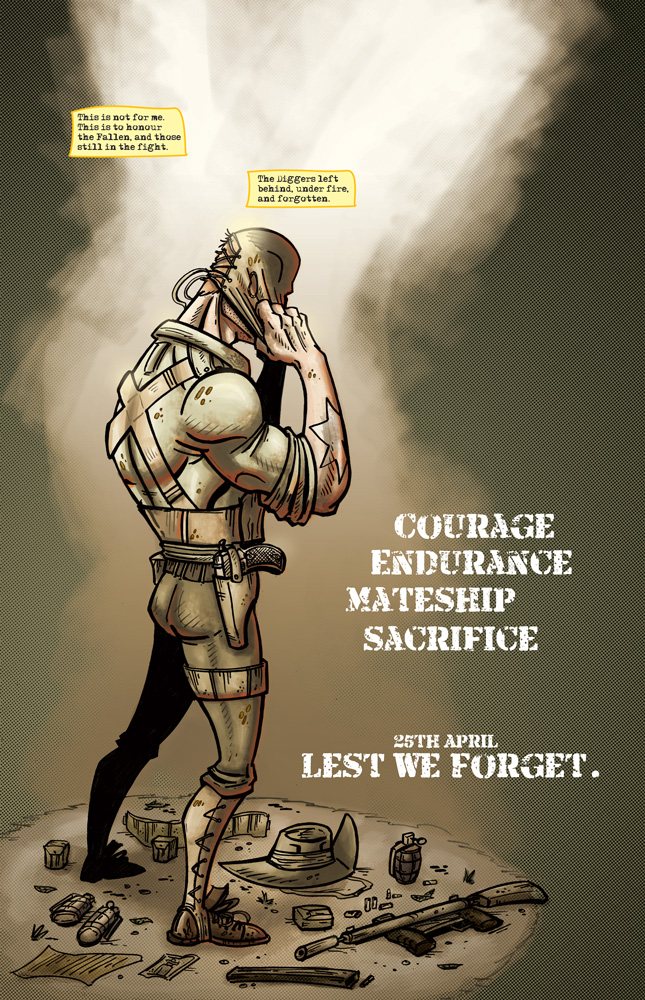 Posted by Paul Mason at 6:33 AM No comments:

All the footage that exists so far for 'The Human Fly'. As the tagline for the 1970's Marvel Comic series read "The Wildest Super-hero ever--Because he's Real!". The 'Kick-Ass' way before Kick-Ass', and just as bizarre and accident prone in real life. Though pulling off some pretty amazing stunts (such as the 300mph mohave desert planeride, strapped upright to the roof!), his rocket-powered motorcycle jump didn't exactly go to plan (see 'Human Fly 101' video below by Steve Goldmann, director of the upcoming movie! http://www.chud.com/98820/marvels-the-human-fly-to-hit-the-big-screen-but-its-no-comic-book-movie/)

This 5 min doco piece by Goldmann is 'The Fly' in a nutshell: 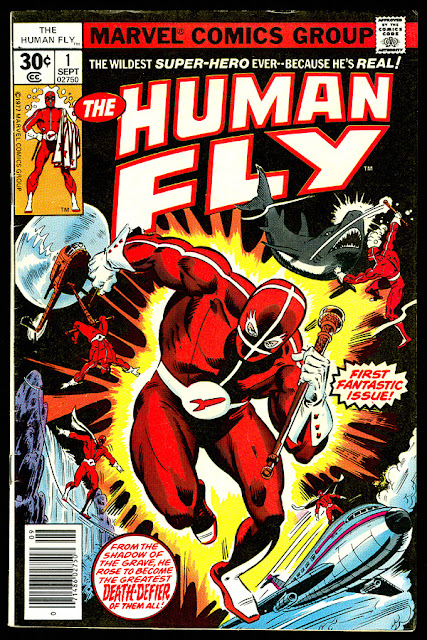 Here's something interesting too, and something I'm stoked about:

" Big News! The Fly will return in 2013:
NEW “HUMAN FLY” GRAPHIC NOVEL, INSPIRED BY THE UPCOMING MOVIE, TO DEBUT AT SAN DIEGO COMIC-CON 2013
Masked daredevil The Human Fly has just pulled off the ultimate stunt – he’s come back from the dead.
Popularized by a 1970s Marvel Comic, the stuntman superhero will return to comic books in July 2013, with a worldwide debut at San Diego Comic-Con.
The comic book is part of a multi-media revival of the real-life costumed daredevil which will include animated cartoons, apparel, and a motion picture to be directed by by Steven Goldmann (Trailer Park of Terror) and produced by Alan Brewer (Playing For Keeps) and Blaine McManus (Sailboat) with co-Executive Producer Joel Eisenberg (April Showers) from a screenplay by Tony Babinski. The film is currently in pre-production.

Inspired by a true story, The Human Fly tells the tale of Joe, a young sausage maker who bets it all on an alleged Hollywood stuntman who claims that 60% of his body has been remade of steel after a near fatal car crash. With their first stunt - riding the back of DC-8 jet while in flight - the Human Fly quickly becomes one of the fastest-rising celebrities of the late 70‘s, taking Joe, his buddies, and all his money along for the ride of their lives!

The new graphic novel-format comic book will feature the talents of a who’s who of L.A.’s comic book scene as well as a gallery of pin-ups by veteran artists who worked on the original 1977-78 Marvel series.

While the original Marvel series only ran for 19 issues, the Human Fly has grown a cult following over the decades.Babinski, Goldmann, and Brewer plan to sequel-ize the new graphic novel, as well as post original web comics on their official website,http://www.thehumanflymovie.com/THE_MOVIE.html "

More soon, Soldiers!
Posted by Paul Mason at 5:32 AM No comments: 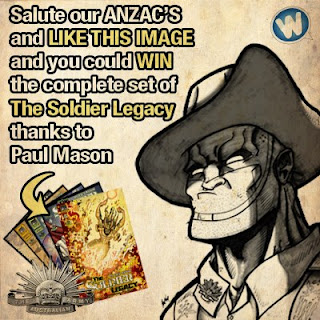 Many, many thanks to the fantastic crew at Whatcha podcast for their support and competition in remembrance of ANZAC Day.

Listen to their latest show, with guest host and good buddy of mine, Tristan "T-Rex" Jones, where the comp was announced (around 19 mins in I think ;) )

Thanks again, Whatcha!
Posted by Paul Mason at 8:45 PM No comments:

Guesting it again this weekend on the Gold Coast for the Supanova Pop Culture Expo :D (photos and thank yous for Melbourne up next week)

The event guide is now available from the website, http://www.supanova.com.au/news/supanova-2013-gold-coast-event-guide/ and Chris Sequeira, W.Chew Chan, Jason Franks and I will be causing havoc 11am Saturday in the Supanova Seminar room. Come watch!

Also, in light of ANAZC day this week, every person wearing an ANZAC pin or wristband will get a Free signed Soldier Print with a Soldier comic purchase (1 per customer, and either with Soldier Legacy TPB, Soldier #4, the recent #5 or new Soldier Legacy Strange Tales #1)

I'm located at the appropriate location of T2... 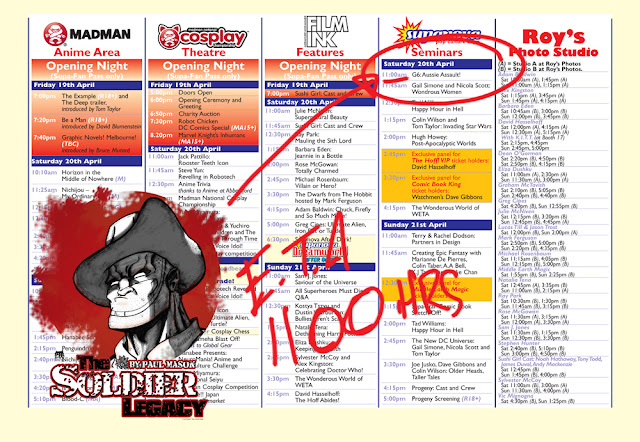 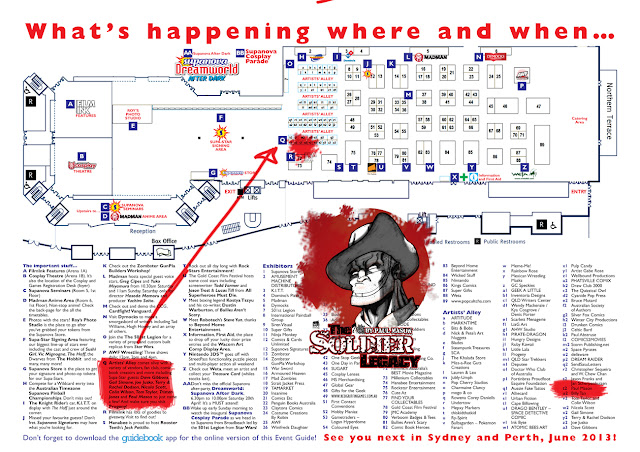 Posted by Paul Mason at 4:19 AM No comments:

In preparation for the World Taekwon-do Championships in Korea in July, I recently got back into my TKD training, and sorted out something I was due to do about 6-7 years ago...my next Black Belt testing. Happy to say I survived and successfully promoted to my 3rd degree a week out from this month's Supanova madness.

In the meantime, Senior Master Jamie Moore and 'brother from another mother' Sabum Gary King were keen to get pics with the latest and upcoming 'Soldier Legacy' comicbooks, including 2 "litttle Diggers" who have been readers for a while. Awesome when the comicbook medium reaches an audience outside of your regular comic readers. 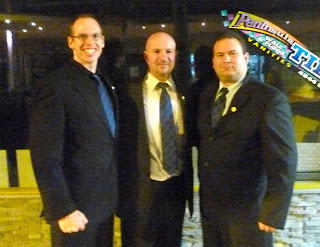 Cluey Soldiers out there might also recognize Sabum Gary from the Soldier Legacy comics themselves- as "Barry", the Young Soldier's instructor from issue 4 and 5, and highlighted in a recent post: http://pm-comic.blogspot.com.au/2013/03/a-firefighter-indeed-real-life.html

Until next time, punch on Soldiers! 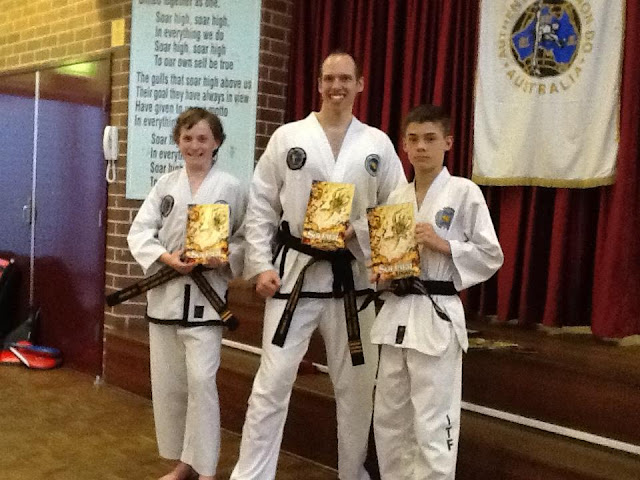 Posted by Paul Mason at 8:07 PM No comments:

See you all at Melbourne Supanova this weekend, Soldiers! 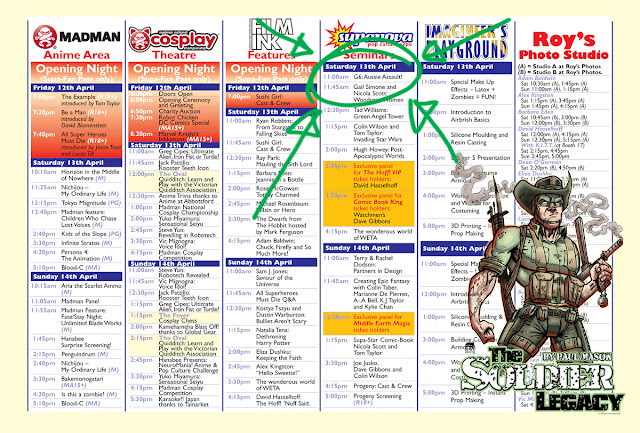 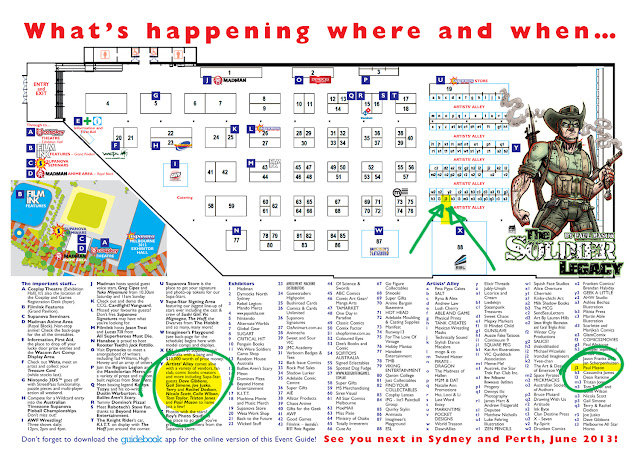 For the full guide, without my graffiti, head here: http://www.supanova.com.au/news/melbourne-event-guide-2/

Hope to see you Soldiers this weekend, remember we're the first panel on the day :
"G-6: Aussie Assault".

...There's 5 of us...I think ;P (Christopher Sequeira, W. Chew Chan, Jason Franks and Jan Scherpenhuizen) , and we do Comics, not attack people....that's only on my off days ;P
Saturday 13th at 11am in the Supanova Seminar room.

Otherwise, see you at J3!

Latest books, brand new prints for you print junkies, and head sketches made to order, or while you wait!

As you were.
Posted by Paul Mason at 6:30 PM No comments:

FORCES OF GEEK: Article with appearance from me, and the Soldier ;) 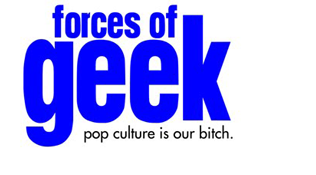 Many thanks to Andrez Bergan for interviewing me as part of the huge international group of Comic artists jamming about what we love about the Japanese culture on the FORCES OF GEEK website:


"BIG ON JAPAN:
A Fistful of International Artists Croon The Country's Cultural Praises
— AND THEN SOME."

The article features two of my pics too- an art only page from 'The Soldier Legacy's Strange Tales #1' published by Black House Comics, and 'The Southern Cross' image from 'Who is Killing the Great Capes of Heropa'

The article touching a little on my Martial arts background in relation to Japan, is here: http://www.forcesofgeek.com/2013/04/big-on-japan-fistful-of-international.html
Part 2 is due out next month :)

Speaking of "..Heropa", another great review for author Andrez Bergan, this one courtesy of 'Pulp Den', with that pic of mine again ;D http://pulplair.blogspot.jp/2013/04/who-is-killing-great-capes-of-heropa.html

Thanks all :D more news soon, including (hopefully) a leak on my latest goings on.
Posted by Paul Mason at 2:47 AM No comments:

Melbourne/Gold Coast Supanova Magazine 2013- Nice to be on the list :D 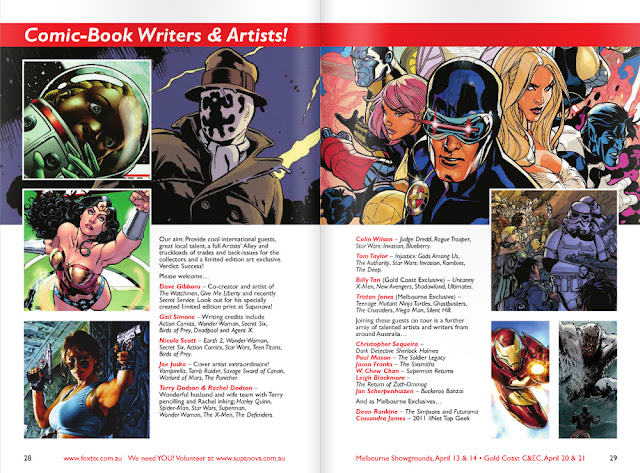 Very pleased to be among some fantastic national and international creators, including fellow Black House comics stablemates.

Prepping for another unrelated trip tomorrow, so gotta roll :D

Thanks again, Supanova! And looking forward to a shotgun visit to Melbourne for the show next week :D

Here's a random comic page, just 'cause I haven't done that in a while :) 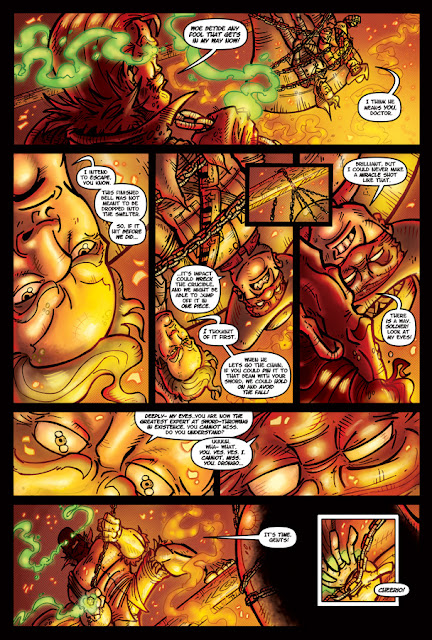 Posted by Paul Mason at 7:34 PM No comments: