The learning process: 'The Soldier Legacy' 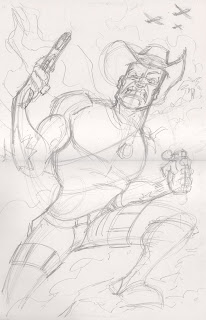 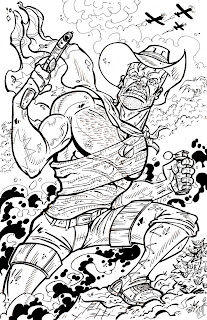 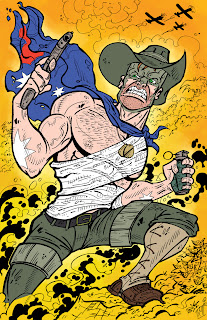 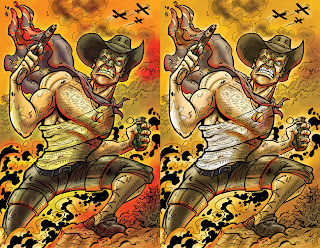 Rendering (trying to find the look I want) 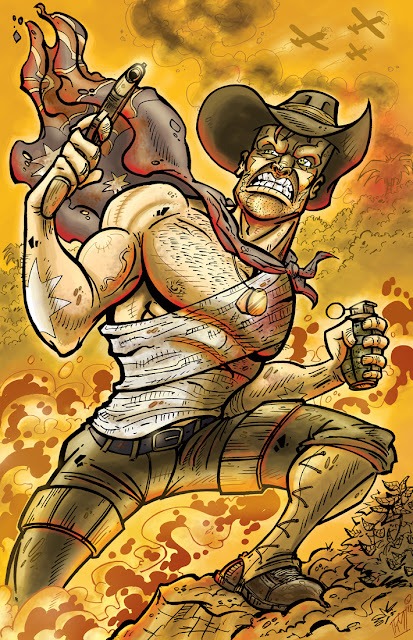 Final (or abandoned-still up in the air, but the other still looked too saturated)

To be published in upcoming 'Soldier Legacy #5'. Thanks all :)

Posted by Paul Mason at 8:35 PM No comments: 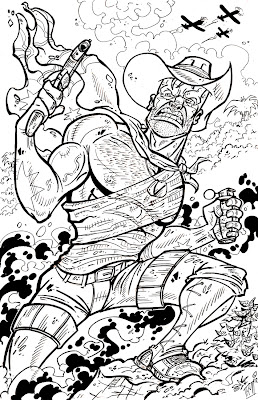 Leaking a couple of pages from the upcoming Soldier Legacy #5, which I'm looking forward to releasing  when I guest spot at Brisbane Supanova Expo in November.

Still going with the last 6-7 pages of pencils, hoping to kick-start the colouring on the weekend to try and catch up before I run into the deadline.
Thanks for the continual support :D 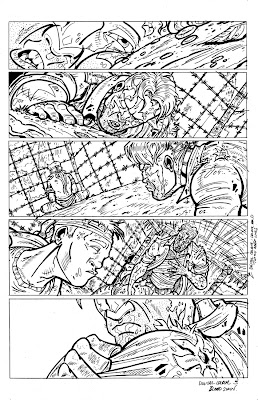 Posted by Paul Mason at 7:25 PM No comments:

I'm Happy to announce I'll be an official guest at the upcoming Brisbane Supanova Pop Culture Expo, alongside some fantastic writers and artists, including Tom Taylor, Tristan Jones, James Brouwer, David Yardin and Jeffrey Cruz, to name a few :

Will be sketching, and have new prints, and the new release of Soldier Legacy #5. Pre-con Commissions list for this has had a couple on there as far back as August (thank you for that!), so if you have something planned, feel free to DM.

See you up here (;D), November 9th-11th at the RNA showground, Brisbane.

I can't tell you how thankful I am to be invited to be a guest at the event. Being a guest at Melbourne and Gold Coast Supanovas this year was an absolute joy, and I look forward to another event in my home state of Queensland. Also this year( June), I was on the Black House Comics table at Sydney Supanova, and had a great time talking to fans, friends and fellow stablemates.  Basically, conventions like the Supanova events are the lifeblood of the local scene, as it allows connection to both traditional comic fans, and first timers curious as to what you're doing with the medium. I am very much looking forward to Brisbane, especially since this little comic venture started out as a self-published book under a small press indie label in Brisbane, April 2010. Without the support of friends at the time, the local fans in my scribbling back in 09 and 10, and for the Supanova event (the only pop culture convention organisation to have regular events in the Sunshine state), the concept would be nowhere.

So, thank you Brisbane, and I'll see you in November, with a plan to have a Brisbane-exclusive print available. Info soon.

Also this week:
Thomas Tung, an Australian Web comic workhorse from Melbourne, has featured some other Australian-created comic characters in LEGO form in an upcoming "The Cosplayer" web comic strip at X-Script Fiction. The one on the right looks familiar... 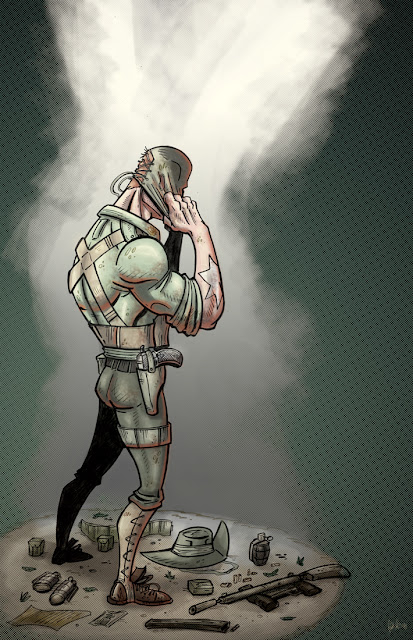 I haven't leaked anything as yet, so I threw this up as I try to juggle more pencils and get back into the swing of colouring before I have to get into the bulk of the issue. Not sold on it yet, brain is still invested in the penciling stage to not want to concentrate on colour...Too much pulling my brain in opposite directions. 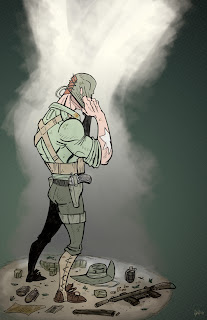 Flats. If time becomes an overwhelming factor, perhaps this is the way to go....we'll see how pencils go.

But, we soldier on. 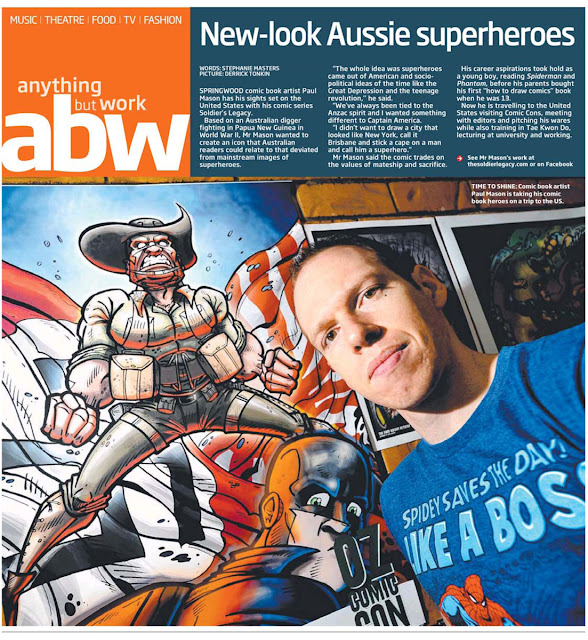 I want to thank Quest Community Newspapers, reporter Stephanie Masters, photographer Derrick Tomkin, and Griffith University publist Lauren Suto for prompting all this, and doing a nice little 2/3rd pager in today's local newspaper, 'The Albert and Logan News'. I was very happy for the idea to touch on my comic art: http://quest.newspaperdirect.com/epaper/viewer.aspx (12th Sept.)

I can imagine it's difficult to write about something you have never read about before, or taken an interest in; so some things and comments aren't quite spot on, or have been shortened for the sake of space. It's a very upbeat article, they were very, very nice to me, extremely professional, and I greatly appreciate their time and coverage :D Thanks again. (and I look like a jerk, because I can't smile without looking manic :P)

Oh, Griffith Film School at The Queensland College of Art was accidently left out of this piece, so I'd like to make a mention :D
Posted by Paul Mason at 10:25 PM 1 comment: 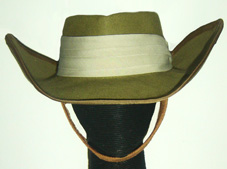 This week, I found this post by Wendy from Philadelphia Philpot, who make wonderful unique hats for commercial and Bridal use. They were the company that created 'The Soldier's' Digger Hat, that featured in the Youi Insurance/Soldier Legacy commercial that appeared on Australian network television late last year, to early 2012. Thank you for the nice comments and post, Wendi :D http://www.philadelphiaphilpot.com/an-oversized-diggers-hat-for-youii-insurance-tv-commercial/ 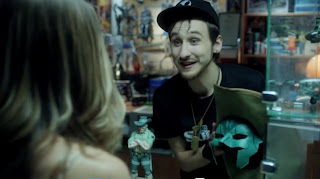 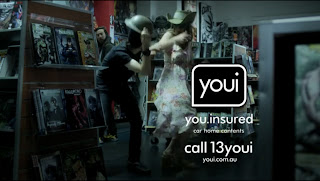 Posted by Paul Mason at 9:57 PM No comments:

April 2011: 'Drawing aNd Animation' Exhibition at the Gympie Regional Gallery 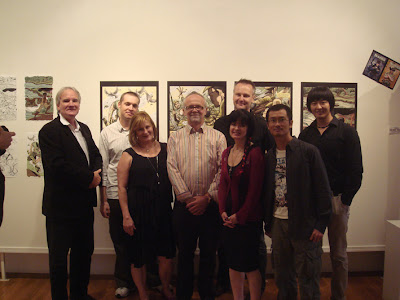 Found this image- Not sure if I ever posted it :S

This was from the opening day of the Queensland college of Art's "Drawing aNd Animation" exhibition, held at the Gympie Regional Gallery in April 2011. I was unable to attend, as I was at Melbourne Supanova that weekend, but the Professors and postgraduates also part of the exhibition kindly posed for this photo in front of my pages from'The Soldier Legacy' #2 that appeared in the show. Thank you to the other wonderful artists from the exhibition: Paul Cleveland, Andi Spark, Louise Harvey, Matt Ditton, Chris Denaro, Xin Li and Zhi-Ming Su  :D (and Ross Woodrow, the Curator, pictured on far left.)

The idea of the exhibition was to show completed images, plus the process. The catalogue for the exhibition shows images from the comic page colouring process, with early flat colours being applied (and I managed to sneak a 'Jack Kirby' reference into the statement ;P) 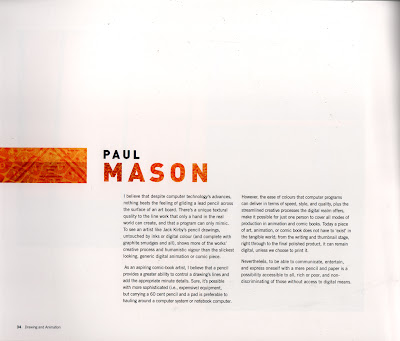 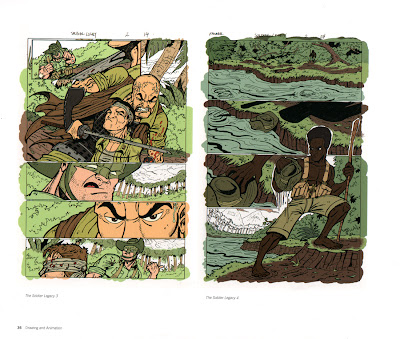 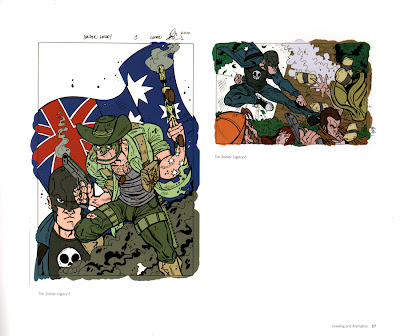 Posted by Paul Mason at 9:39 PM No comments:


QCA 25th Anniversary of Animation from Ozanimate on Vimeo.

Paul Lalo, a QCA graduate and founder of 'OzAnimate', has posted up a video of the opening night of the 25th Anniversary of Griffith Film School Animation Exhibition held on Friday the 31st of August. What's rather fortunate about this video is that there's a few shots of one of the pages they picked from my art, a page from 'Soldier Legacy #3', featuring the Grandson of 'The Soldier'. 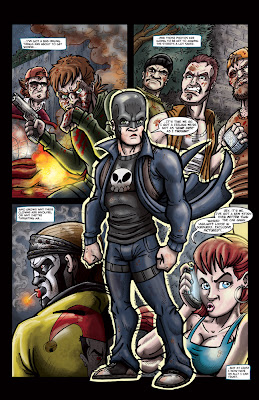 Also featured in the exhibition was an early bunch of concept art scribbles from 2009, looking for the design of 'The Soldier'. 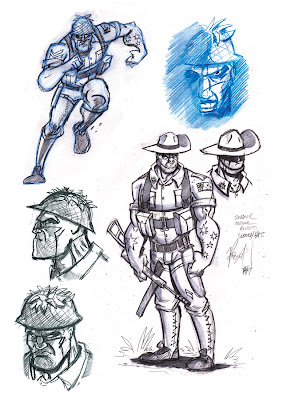 Photographs of the screenings on Saturday, and Sunday's 'Where are they now?' Panel that I was asked to take part in, are also up to they GFS site: http://animation.griffithfilmschool.com/photos-from-sat-sun-screenings-and-presentations/ I was in awe of the calibre of animation talent at this, with past students (now experienced pros) working across a gamut of companies, from Disney, Animal Logic, Liquid, and even their own production studios. The common theme seemed to be hard work, tenacity and patience. Many of these folks took years and years to make any significant headway in their chosen profession; this is something I have to remind myself. I must reflect on the fact that I've hit a few goals in just 2 years of doing this character- succeed or fail, I just have to keep plugging away. 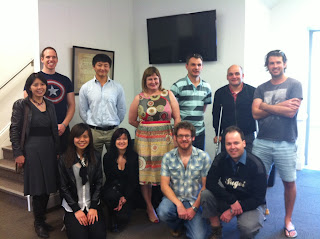 One of the other pieces they printed for the exhibition didn't make the walls due to space, (the Superman vs OMAC pic on the right) but was nicely given to me by the uni. Very unexpected, and I thank them very much :D I've never bothered to have any of my own images up in the house before, except for one or two to hide some bare brick space downstairs, so now with this image, I've made a small space in the corner so I can look up at them and cringe at all the glaring errors I can see. Onward ;P 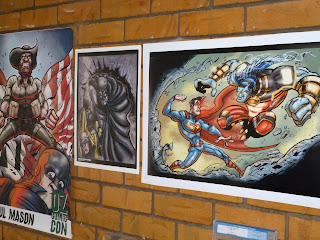 Posted by Paul Mason at 8:45 PM No comments: 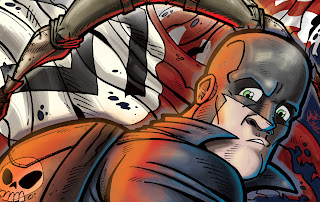 http://thesoldierlegacy.com
Content being tweaked, but the site is coming together as (hopefully) a nice little hub for the comic, and link the blog, facebook and main site together.

More content to come, including a short education section, fan photos, and pencil previews for issue 5...
Posted by Paul Mason at 2:42 AM No comments: 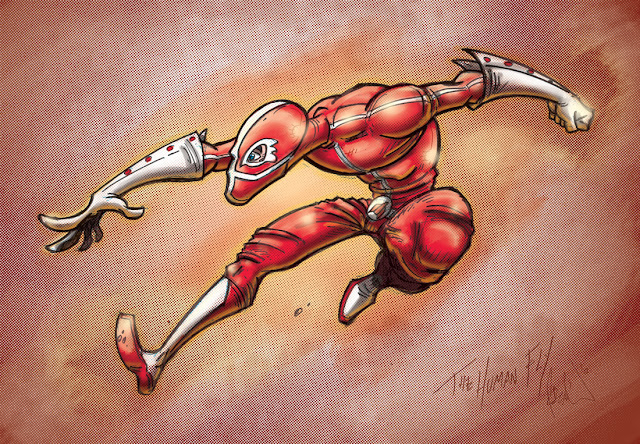 Pencil previews from 'Soldier Legacy #5' soon. In the meantime, here's a random sketch and colour splash of a cool character, "because he's real": The Human Fly. Get on google, kids ;D
Posted by Paul Mason at 2:30 AM 2 comments: