A row of Soldiers.

Proud stockists of Australian-made titles, Kaboom comics posted their current wall of comics, which kindly features and entire row (2nd from top) of my blood and sweat to date, in the papery form of 'The Soldier Legacy'. For their sake, I hope people buy it to alleviate the space for them. I'm a fan of comics being in reader's hands (if they choose it to be; and thank you by the way if you have), not gathering dust for the retailer. Cheers, Kaboom! Much appreciated.
https://www.facebook.com/pages/Kaboom-Comics/115137808869
https://www.facebook.com/photo.php?fbid=10151669293083870&set=t.724342755&type=1&theater

I'm hoping to add to the titles seen here soon, but with the Human Fly commitments mid year, plus the Australian TKD team (recent UK commitments and new tenure as sparring coach for 2014), overseas and interstate work/commitment-heavy travel, my university lecturing commitments, my Doctoral Thesis due ASAP, other the creator-owned title in concept phase for that US thing we landed in SDCC, my commitment to Graphic at the Opera House, and the day job to keep the debt collectors away, I'm planning to take my time with the current Soldier output, before it all kills me, and I fail to reach any level of standard or quality just to reach an unrealistic deadline that doesn't have to exist.

I gotta go, I hope you are all fighting on with whatever makes you happy. Or, failing that, whatever you have to do to keep moving forward.
Cheers, Soldiers.

Arrgh, too swamped to even make this one coherent. Will do my best:

Firstly, Brisbane Supanova have announced me as a Guest. Very proud, considering too, one of the first industry guys to ever give me feedback on my work (the original Soldier Legacy #1 pages) was John Higgins. A gentleman, we caught up recently at San Diego Comic-Con in July, and I'm honoured to be on the Guest list with him. His Razorjack series and Judge Dredd art is beautiful.
Tickets go onsale for Brisbane in November today I believe...hope to see you guys there?

And an article on the upcoming animation and comics guests for Brisbane and Adelaide:
http://www.supanova.com.au/news/comics-love-supanova/

To my surprise, I had been remembered for my uni research topic- I'm studying a DVA (doctorate of Visual Arts), looking at comic books, creator methodology and superhero stuff (to be general, you can tell I'm in a hurry, can't you?) at QCA, Griffith University at Southbank. Anyways, next month, the organizers of GRAPHIC! at the Sydney Opera House, have kindly asked me to moderate a Focus Q & A panel with Will Eisner Comic Book Award Hall of Famer, Len Wein. Details below:
http://www.sydneyoperahouse.com/whatson/graphic13_creator_focus_len_wein.aspx 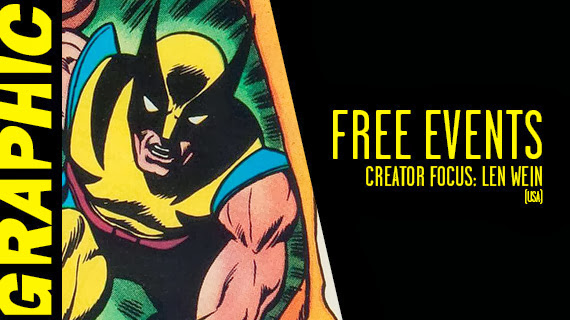 "A career-spanning insight into the works of this major force of comics who co-created Wolverine and Swamp Thing, revived The X-Men, and edited Watchmen.

Len Wein is a comic book legend: an industry veteran who has changed the face of not only comics, but pop-culture as we know it. A former Editor-In-Chief of Marvel, DC, Top Cow and Disney Comics, Len will now grace GRAPHIC to give audiences an intimate look into his innovative yet timeless approach to comic book storytelling.

The co-creator of iconic characters such as Wolverine and Swamp Thing, Len is celebrated for reviving The X-Men universe with mutant favourites including Nightcrawler, Storm, Colossus and Thunderbird. Writing for a breathtaking list of long-running titles such as The Hulk, Spider-Man, Fantastic Four, Thor, Green Lantern, Justice League of America and Superman... Len has also edited hundreds of comic books over the years, most notably Alan Moore & Dave Gibbon's game-changing masterpiece, Watchmen.
Combined with television plots for the likes of The Avengers, Batman, Transformers, Ben-10, The Super Hero Squad and Iron Man and his role in writing the Before Watchmen series, Len Wein has truly earned his place in The Will Eisner Comic Awards Hall of Fame. Now hear the master discuss his life's work in comics in an intimate solo session exclusive to GRAPHIC 2013. "

'He has written the most important Marvel books not written by Stan Lee' - The Examiner
'One of the comic book world's best loved characters' - SMH
'The first time I fell in love with a writer was your run on Swamp Thing' - Neil Gaiman
I'm very excited and looking forward to getting into prepping for this. As a big 'Wolverine' fan, it will be a thrill to pick this gentleman's brain for stories on his career, writing methodology, influences etc.
I'll be certain to keep my Wolverine and Hulk "fanboyness" to a minimum... 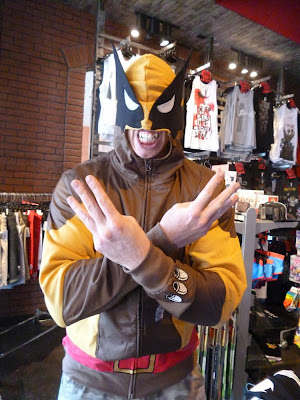 At ZICS, had a chat with Steve, Todd, Wade and Dan from 'Geek Speak TV' https://www.facebook.com/geekspeaktv Unsure if the interview will drop, but they're a lovely bunch of guys and always pleased with their support of the comics scene in this country. Here's a photo where I look like 'Simple Jack' ala 'Tropic Thunder'. Thanks for the mention and the kind words on the recent podcast too, gents :D (about 15:56 mins. in)

Thank you gents, a nice surprise and much appreciated. Not *quite* right with the issue numbering etc. but I couldn't care less; it was a lovely surprise. I cringe looking at these older issues (and my early attempts at comics), so for someone to find something nice to say about them is always a plus ;D 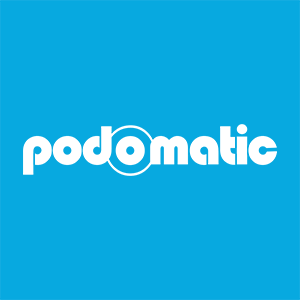 Posted by Paul Mason at 8:13 AM No comments: