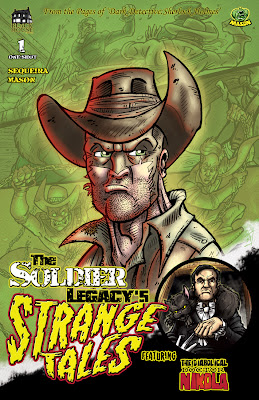 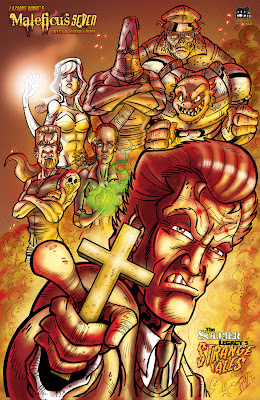 Available next week at Perth and Adelaide OZ Comic-Con, and April at Melbourne and Gold Coast Supanova, thanks to Black House Comics.

Packed with story!
You must not miss this! ;P 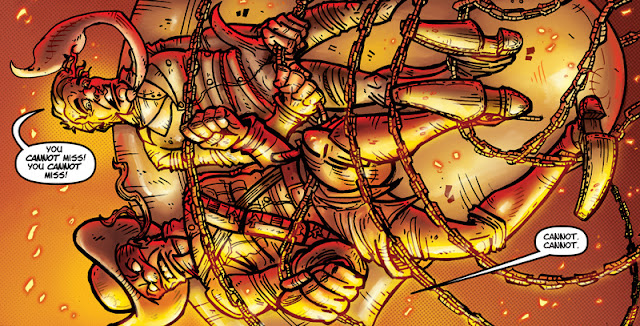 Posted by Paul Mason at 5:47 PM No comments:

Really looking forward to being on the panels with some good friends, fantastic creators and an awesome bunch of people.

Posted by Paul Mason at 5:27 PM No comments:

This is the cover for the back up feature in next month's 'Soldier Legacy's Strange Tales'. It features characters created by writer Chris Sequeira and myself, which has a bit of a slight history that I couldn't be bother talking about in depth now, but basically it was a pitch that Chris presented, and I illustrated the original idea, using a cast of supernatural characters from one of the big guns. They couldn't find a place for it, so we then decided that we could create our own characters and do something ourselves with it.

What you see above is basically the concept ideas we talked about, and I went away and played on the drawing board. A couple of character ideas and details were merged- I'm not sure if it was forgetfulness, lack of sleep or otherwise, but essentially what notes we made in a plotting session last year is what you get. We were going to launch the original 8 page strip in last year's Black House Comic anthology 'Parahuman'. It was fun to plot- basically, the first 3 pages existed for samples for myself, and concept pitch for Chris. That character was removed and ours entered, and the remaining 5 pages was tossed around, and action panels made "Kirby-style"- however I wanted a demon to be "dealt with", I did :P. However, the Parahuman book was cancelled. At the time, I recall being pressed for time with Soldier #4, The Soldier graphic novel, the 6 page back up story in 'Dark Detective: Sherlock Holmes', and pencil layouts for the artist, that were all due at the same month. I was upset we lost a cool title that Parahuman was going to be, and the page rate and 50 copies of the issue was for all intents and purposes, the best thing going in any independent publisher I've seen on our comic scene in recent years. So it did boggle the mind that creators didn't jump on board. I'm getting off topic.

Anyways, the pages for our story were penciled and feature in my 2012 folio issue for last year's LA trip (colouring was shelved 2 pages in, but pencils were the aim of the game anyway), and got great response from industry folk. We decided we should finish the strip based on that positive response. When issue 5 of the Soldier was complete late last year, I restarting colouring, and finished it last month, where Mr Sequeira worked his scripting magic for me to letter, and here we are, ready to insert into our appropriately titled "Strange Tales" one-shot. We'll see what you readers think, yeah?

Anyway, think 'The Dirty Harry of Exorcists' (hence the homage to the original 'Dirty Harry' film poster and Clint Eastwood-ism in the main character). The names of the rest of the 'Seven', include (from left to right, front to back) 'Johnny Incubo', 'Ju Ju Heart', (then in white) 'Sister Strigoi', Sinquisitor, Grotesque, (and at the back) Deadriver.

Oh right, the cover. A pinup for the book, and most likely a back cover for the issue.
Like all my colouring, it's "man, this isn't working, what the hell am I doing?", until it gets completed, and it does work. Kind of. *sigh.
If I saved a screen shot or jpeg of every colour variation for the foreground figure, and the background figures, there would be about 200 images in this post, particularly when flicking through colour blend types, or overlays to lighten/knock back/bring forward the characters. Craziness. The main things I aim for are a clear focal point, value control, temperature control, and making sure the characters seem like they're in the environment- I feel if you manage to maintain the character's colour scheme in an image, you've failed. I feel you need to include the colours and "lighting" of the environment on your characters, otherwise the image comes across as "gawdy", with elements fighting for attention. Anyway, my 2 cents; I could be wrong. I prefer pencilling- I colour out of necessity.

The top of the post in the final image, and the process is below (roughs, clean up, flats, black and white value checking (an early one- still has "muddy" grey bits undefined), the almost finished colours: the pre-colour line holds and extra fiddly "on-top-of-the-lines" colours and highlights that the completed image has (in my poor man's attempt to get a "Dean White" feel to it). Unfortunately I lack the skill, patience, and bravery to be able to pull off the work he does in this colouring, and my little bamboo tablet is no match for the hand/eye control a Cintiq would allow to even properly pull off those fine white line details that lift his coloured characters off the page. One day perhaps, when I don't have multiple day jobs and actually make enough money to be comfortable enough to invest in toys....*to dream. Anyways, I make do with what I have, and a lack of equipment, or inspiration or any other thing you can think of, is no excuse when it comes to producing something. That's the beauty of the comic medium- worlds can be created with a pencil and paper. 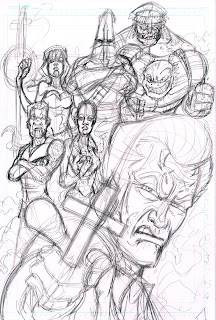 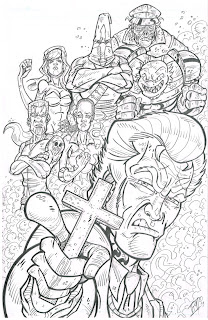 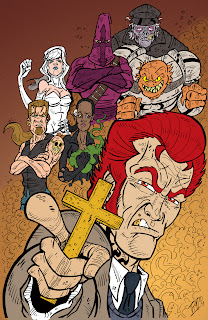 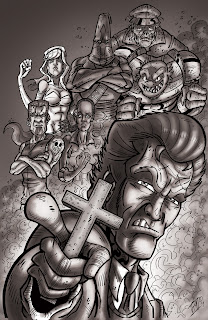 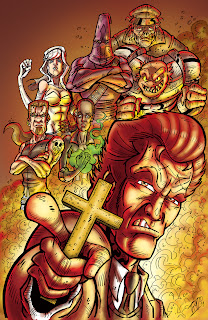 Posted by Paul Mason at 3:15 AM No comments:

Turns out you don't have to be online to get pimped sometimes ;P

Hey Soldiers!
Sometimes it's fantastic to know that I'm not just on a desert island, lobbing bottle after bottle into the ocean, wondering if anyone really gives a *** about the comic books I cram into that little glass "vessel". Thankfully, apart from you more vocal readers who touch base with me, or the lovely folk who appear at the conventions around the country, there are some great folks in the national pop culture scene who give you faith that perhaps I'm not marooned after all.

Over the weekend, the awesome crew from 'Gifts for the Geek' in Geelong, posted the banner for the upcoming appearance with good buddy Paul Abstruse for FREE COMIC BOOK DAY. Should be loads of fun, and I'm very much looking forward to visiting Geelong again. Last time I was there, was for the 2007 World TKD Championship Australian team selections (I can't remember the year, but poor Peter Brock had passed away that day, and that sticks in my mind).  It was also freezing. I'm sure that time of year, it will be a little warmer ;D 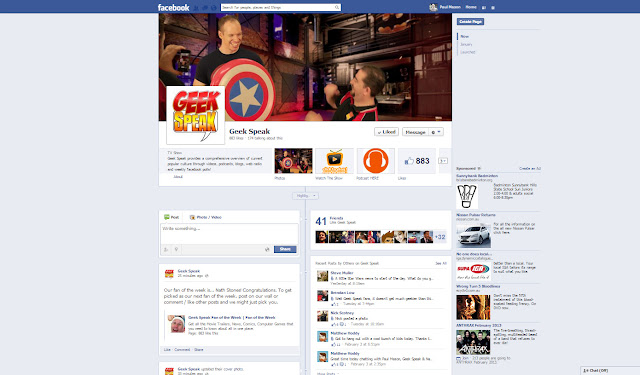 I'm a 'Cover Girl' :P
Thanks to the nice guys of 'Geek Speak' who surprised me with this pic on their Facebook cover page, taken at a recently recorded interview. That should drop in a few weeks I believe. Thank you again, gents. It's a hard slog, and I appreciate the support and kindness.

Then again, I haven't listened to this yet, that I was recently tagged in...I'm sure it's good, because they know I'll find them ;P

Speaking of Geek Speak, the brains behind Kaboom Comics in Toowoomba also posted this promo pic of all their Aussie titles. Have a read here :D

Anyways, Troops; it's time I get back to it. Please support your local comic stores- Ace Comics and Games recently stocked some Soldier Legacy titles, so you have no excuse either, Brisbane ;P

As always, Thank you again :)
We soldier on.

UPDATE: Oh yeah, there was of course, this...

(Thanks Mr Black and co. ;P)
Filmed during the more recent appearance on the Late Nite Show.

Posted by Paul Mason at 2:52 AM No comments:

Last week, Australian drawing community Facebook page OzComics chose 'Australian comics' as their drawing topic for the week, in honour of the recent Australia Day weekend, and Whatcha podcast's Australian comic special. To my surprise, some of the locals in the OzComic community chose to scribble their renditions of 'The Soldier' from ww2, featured among other Australian-made characters in the album, such as Trevor the Bull (from 'Greener Pastures'), McBlack, Southern Squadron, Cyber swine, Dark Nebula, Winter City's 'The Reaper', Zed Mercury, Buzz Mandible, Killeroo, and Billy: Demon Slayer, just to name a but a small few.

View the whole album of entries here! And below, are the kind appearances of 'The Soldier'. Click the links for the bigger pictures/source of origin, and thanks again to all the kind folks who feature here- it's fantastic to see everyone's take.

Last Sunday, I was lucky enough to be invited out to Ace Comics at Annerley to have a one-on-one interview with the great people of Geek Speak TV :D

It was loads of fun, and great to see the crew, meet fellow interviewee Brad Scott of Naked Zombie Radio http://www.naked-zombie-radio.com/, and say a warm hello to Australian comic creators Matthew Hoddy and Caitlin Major, who do the web/self-published series 'Space Pyrates': http://spacepyrates.com/

Speaking of Space Pyrates, do you want your own collected edition of this Aussie comic series? The creative team need your assistance, and you get cool stuff in return! What's not to dig?!
Space Pyrates Collected edition Pozibles campaign: Check it out!
http://www.pozible.com/archive/index/11956

Oh, and thanks again to Glen at Ace Comics at Annerley- You troops should be able to find, or get a hold of, the Soldier Legacy TPB, #4 and #5 from either Annerley, Queen Street Mall store, or Comics Plus, on the Gold Coast :D https://www.facebook.com/pages/Ace-Comics-Games/113878159670?fref=ts

Here's a bunch of pics from the day, thanks to Brad, and Todd and Wade for the photos. 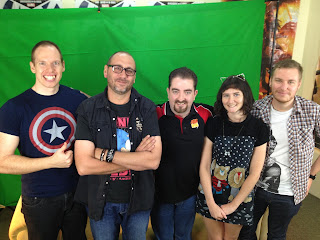 More details soon when the interviews are released. Thanks again, Geek Speak! Always a privilege to talk to folks like Geek Speak, The Late Nite Show, Kapow!, Whatcha podcast etc. who appreciate my toiling in comics. More troops in the Soldier army is always welcome :)

Posted by Paul Mason at 4:20 AM No comments:

Just an update on the events I've been invited to as comic guest. Looking forward to catching up with fellow Black House Comic friends, and Soldier readers, new and current.

May 4th : FCBD at Gifts for the Geek, Geelong Victoria (More details to come).

A big thanks to all the staff and crew of the following shows. Very pleased that they make huge efforts to promote national creators, and I'm very touched to be a part of it. Last year was my first year as being a guest of these shows; and all the good folks that came by, as followers of the work, or new to it, were very encouraging and enthusiastic about the series. Comic book, trade paperback, prints, sketches or commission people, you all play a role in supporting local creators and helping me on my journey. Many lonely hours, days, weeks, months and years has gone into working on the illustration, and it's touching to have people that count acknowledge the work, and readers on board. Anyways, this is becoming too reflective, and I'm letting the scoffers and trolls get to me. I had a backhanded compliment paid to me this morning via email and it's soured my mood a little. At the end of the day, you can only focus on the work, make it the best you can, learn, improve, move on. Tomorrow, I've been invited to chat to the guys of Geek Speak TV, so let's get the groove back and round out the weekend on a happier note. See you guys in your respective states soon, with new stuff I hope you dig :D
At ease, Soldiers.
Posted by Paul Mason at 12:54 AM No comments: