The Soldier Legacy. And now, the End is Near. 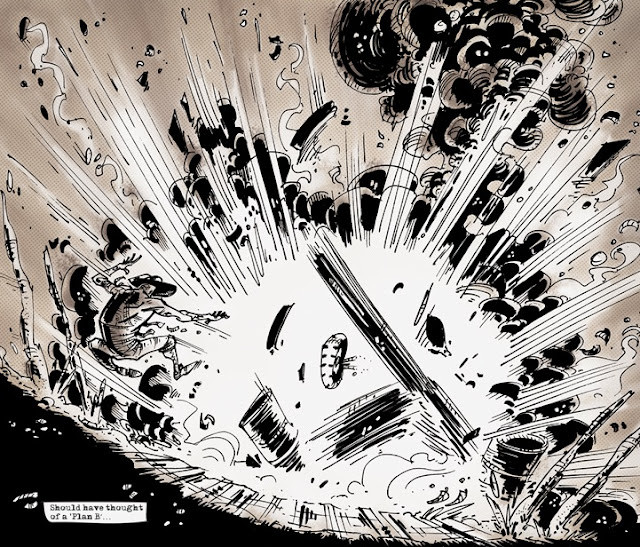 After having an extremely low number of Soldier Legacy issues sell at Melbourne OCC, and looking over the numbers of Soldier Legacy 6 from the conventions this year (Perth, Adelaide and Melbourne Oz Comic-Con), it has re-affirmed my current thoughts that this issue will be the penultimate chapter of this comic book, with the series ending with issue 7.

The last chapter will likely go straight to trade paperback. I felt as though I put way too much of my enthusiasm, time and sweat into this latest issue which I found has been akin to putting them into bottles and floating them out to sea, never to see or hear about them again. For my emotional wellbeing, it’s a drain. Sure, comics are not as hard as digging a ditch, but then again, you don’t pour your heart and soul for months into creating a hole. The writing, drawing and assembling of this issue solo was very anti-climatic. I’m still finding most are going for the first few issues in trade paperback form, meaning I need to re-evaluate the point of continuing. The trades have been the constant best seller, by and far over the single issues. I ran out of TPBs early this year and since the dissolving of Black House Comics late last year (publisher of the series), I have been reluctant to chase a further reprinting of this volume until the 2nd volume is complete. I wish to thank everyone who has purchases the single issues and the Volume 1 trade in the past.

I originally began this series as an aim to experiment with the comics form, illustrating and writing methodology, for the aim of achieving my doctorate. I was awarded my Doctorate in Visual Arts recently, and though I will continue to work in comics (such as lecturing/tutoring, my current projects for other Australian publishers, freelance work, and pitching), it seems that perhaps my attempts for an action- adventure hero in the same vein as The Spirit, Indiana Jones, Sg.t Fury or The Phantom, with an Australian sensibility, have been a poor one. Or perhaps, the Australian as a hero is not as relevant or inline with the current sensibilities of a comic reading audience as I had hoped. Perhaps the idea of an Australian comic character in a mask seems hokey to most. Perhaps the relevance of the Anzac spirit only holds for most on two dates a year in April and November. Perhaps the current wars in the Middle East hit too close to home, or that the idea of being a proud Australian is tainted because of the elected officials seemingly running our country. Perhaps you can’t fight cultural cringe after all. Perhaps simply, my drawing style doesn’t resonate. Either way, I can’t figure it out, and it’s time to move on.

My final paragraph of my doctoral thesis touched on my personal thoughts:
“…What the future holds for The Soldier Legacy after this current story arc is over is uncertain. Whether continued interest in this Australian action hero continues to grow or stagnates is unknown (much like the nature of the medium in general), or whether it was even a blip on the Australian comic scene mindset is unknown, as fickle and fractured as I discovered on my journey... It is not the work I wish to ultimately define me; I wish to grow beyond it, and will probably feel more proud and satisfied with it when I have finally reached the conclusion of the last issue.
However, I am thankful for the opportunities that have arisen from researching and creating comics, and that I have been able to achieve what I set out to do from the onset of this research…”

I am pleased with what I was able to do with the character and comic series in a short few years: meet creators here and overseas, gain meetings, feedback and contacts and friends with the biggest comic publishers in the US such as DC and IDW, work in a professional capacity in a field I always wanted to do since I was a kid, have the character and books feature on TV via Youi insurance, attend many conventions nationally as a guest, draw a crossover which featured in a Sherlock Holmes comic which sold throughout Australian newsagents, and feature in past (and some upcoming) publications for other publishers, and gain knowledge and ability which ultimately lead me to becoming a Doctor in Visual Arts.  This is thanks to not only the friends and fellow creators who actively supported or assisted in the issues, and the handful of comic stores that stock Australian independent books, but for the folks who own a copy of the book, or who showed their appreciation for the series or concept at the conventions around the country. 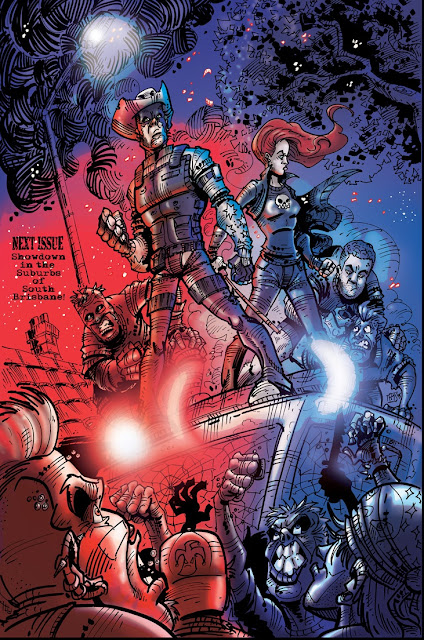 I still have a few boxes of back issues (#1 – 5, the recent #6 and the Strange Tales one-shot) which I will endeavour to have with me at the conventions I will attend, and volume 2 is still going ahead, self-published or otherwise, but for now, my lecturing commitments, and current graphic novel will take precedence over something that now just seems like an exercise in indulgence, rather than something that people actually care about.

Perhaps one day down the track, when I’m not so caught up with other projects, I will change my mind. With the right story and demand, you never know. But for now, the current title of the story “And now the end is near” is spot on.

Anyway, as I ended my thesis with this, I will also end this thought stream with this. The words of one of my inspirations: Jack Kirby:

“Comics are a universal product. They have no boundaries. You can use them in a very serious manner or just for laughs. Comics can be used to educate, to entertain or to provoke deep thought. A well-read person will one day produce a classic epic in comics, one that everybody will remember. I wanted to do that, but I think that's going to be somebody else's job. I'm happy that I got the chance to accomplish what I did.”

Posted by Paul Mason at 6:27 AM No comments:

The last six months in a nutshell aka Slack Blogger

Long time no-see. I realised a while ago that I had neglected this blog; simply a lack of spare time killed my updates. Last night I wrote something that I want to post, but felt it necessary (or perhaps OCD) to update what's been doing since my last quick blog post back in October (just for continuity, I guess).

In December, Matt Emery of Pikitia Press conducted his yearly survey of Australian and New Zealand Cartoonists, writers and comic scribblers, and I used that as a recapped of sorts for the neglect I gave this blog. I'll dot point the rest, with photos being able to be tracked down at the Soldier legacy FB page here for anyone who actually cares: https://www.facebook.com/media/set/?set=a.853993751355416.1073741830.115746865180112&type=3

So, below is the recap, many thanks to Matt for the yearly inclusion. The original post (and the rest) can be found by following the link here: http://www.pikitiapress.com/blog/2014/12/19/2014-in-review-paul-mason


2015 in super brief (because who wants to read paragraphs of my BS):

> This week ended 5 years of slaving away on this: 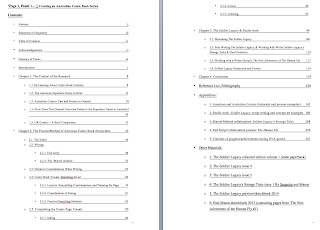 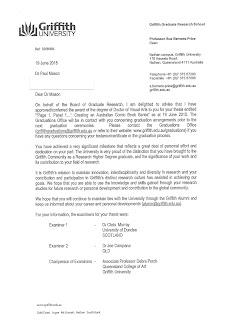 …For which I'm very pleased. The last couple of weeks that involved the extra research, editing and 10 pages on UK comics was interesting and stressful at the same time. Juggling the drawing and teaching commitments was more of the issue than anything else (the lack of sleep mainly), but got there in the end.

>We're nearly 10 months into hosting the Monthly Comic book Meetup group for the Brisbane Square Library. A great, laid back group of people who are great to have a laugh with every third Friday of the month. 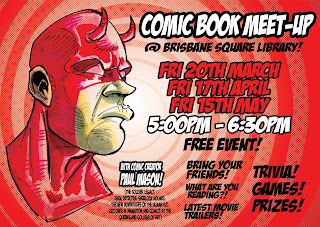 > Was a guest of Perth, Adelaide and Melbourne OZ Comic-Con, visiting some lovely cities and meeting some fantastic local and international creators. Basically, the by-product of these trips is to catch up with good friends, talk a little shop, but mostly relax and have a working weekend away from work at home. I must say (with no bias) that Gestalt's releases this year have been stellar, and the folks working on the books are some of the nicest people I've met in this game. Looking forward to Brisbane and Sydney in September. 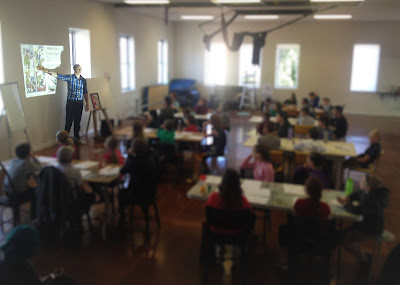 >Uni lecturing continues at The Queensland College of Art, and Comic Book Workshop teaching at The State Library of Queensland, Brisbane Square Library, Toowoomba City Library,  and The Grove Library in Perth. The future of comics in Australia lies in kids learning, drawing and being enthusiastic about comic books, and sticking with it.

>Soldier Legacy #6- released April this year- still working towards the next TPB. 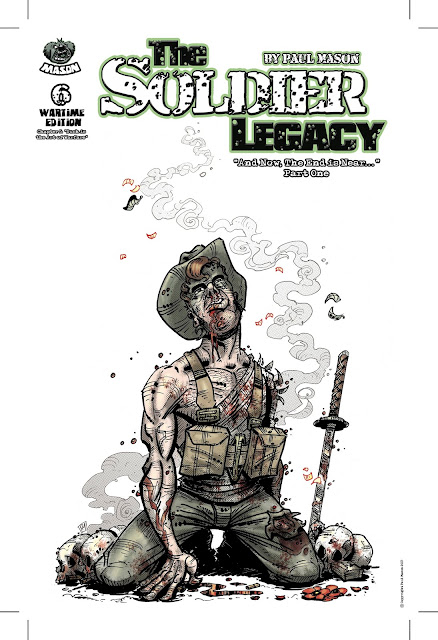 With other pitches, work and stuff in between, I'm hoping the year ends better than last year. So far, so good. Anyways, thanks for indulging while I try and remember all the little bits and pieces of the year so far. (Oh, not too many tournaments (2) so far- took time off for work, but maybe pick up the pieces of the fitness regime and hit it again for later in the year.)

Posted by Paul Mason at 6:08 AM No comments: