Thanks to the awesome and top quality outfit, Jeffries Printing Services in Sydney, I am pleased to announce that a new edition of the out-of-print volume 1 trade paperback of 'The Soldier Legacy' will be available at the upcoming Brisbane and Sydney OZ Comic-Con in September, where I have been invited as a guest to attend. 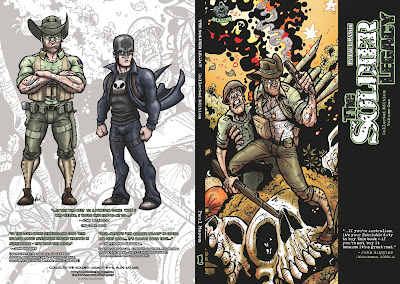 Further to this, A volume 2 will be available for the first time, which will collect #4, #5, the Strange Tales one-shot with good mate and top writer Christopher Sequeira (who just finished working with Mark Waid on Dynamite's 'Justice Inc. The Avenger'- congratulations again mate!), and a stack of extras, including pages from the wartime edition of issue 6 (which was released earlier this year in Perth, Adelaide and Melbourne). A massive thanks to Nicola Scott, Andrew Constant, Christian Read, John Higgins, Christopher Sequeira, and John Retallick for their extremely kind words that appear on the covers, to Baden Kirgan of Jeffries Printing for helping to make this possible, and to my partner Amanda for her support in the project. A volume 3 will wrap up the storyline, is aiming for a 2016 release, which will at this point include a colour version of #6 (not previously released), and the over-sized final issue 7, plus extras of course. 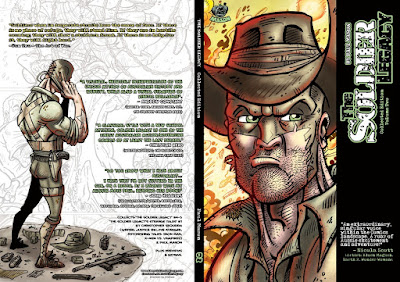 Priority at this point is also still to forge ahead with the current work on the drawing table, but more news on that when I can. Again, I'm so stoked to be doing something for this publisher and with kick-ass scripts from a great writer. The hard part is doing the words justice.


Oh and just briefly, an update on the absence: Again, held up by a few things since the last post. Lecturing at QCA a large chunk of the weeks, with a fantastic and talented group of 1st, 2nd and 3rd year students. Awarded the Doctorate (yeah, Dr. Paul Mason…insert your jokes here), and the Monthly Comic Book Meet ups that I host (along with instigator and fellow Geek, the lovely Amanda Bacchi) at Brisbane Square Library are still going strong, with our 1 year anniversary coming up. Obviously all hasn't been sunshine and rainbows, but we all have our own wars to fight; all we can do is march on, right? Always be thankful for loved ones and close friends to help you out. 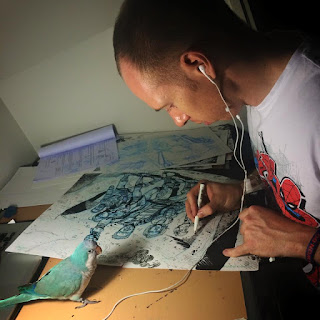 Speaking (somewhat) of which, A small full colour 5 page Soldier Legacy related story has been completed for the ComicOz Book 'Australia!', raising money for Beyond Blue, the charity battling Depression and mental illness. More on that one soon, and it was a nice opportunity to add another piece to the Soldier mythos, featuring a "Soldier" of sorts in the cane fields of North Queensland in the 1930s, and a pet bird in honour of our lost little mate "Chuck", who died on the operating table a few months back.
Anyways, apologies for bringing down the mood, hope you are all well, and speak soon.
Posted by Paul Mason at 1:22 AM No comments: