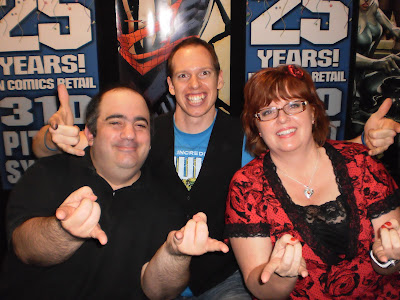 Successful weekend despite the low numbers, sold numerous issues of "The Soldier Legacy" #1 and #2, sketched my brains out, and was able to meet the awesomely nice Mr Dan Slott (The Amazing Spider-man writer) and Ms Gail Simone (DC writer for such titles as Wonder Woman and Birds of Prey) Her husband was a lovely guy too, and I'm always pleased when the professionals are so accomodating to the fans. I was very lucky to have them agree to answer a few questions in the future, prudent to my research degree paper, and also pleased they accepted copies of my comic books and signed my ones (as you may not realise, I've been collecting Spider-man since I was 13 so was pleased with this meet :).
Plus, I was identified by Mr Slott as"The guy that catches thieves for a living to afford to buy his Spidey books." Actually, yes...the only reason I restarted my Spider-man standing order at COMICS ETC. was that I picked up a Loss Prevention job and could afford the books again...Action isn't my only reward :P (Audience Groans).
Also Aussie comics wise, made friends with Jason Paulos and Jason Franks, met the Dark Detective: Sherlock Holmes illustrator Phil Cornell, met Bruce and Matt who have books with Black House comics, met Baden Kirgan, publisher of Black House comics and catch up with friends Chris Sequeira, Jan Scherpenhuizen, W. Chew "Chewie" Chan, Paul Abstruse, and Hayden Fryer. Nice guys and a load of talent. (And of course a few familiar faces like Paul from Aussie Fake Tats, Rob 'the main man' from Armageddon and Mark the volunteer). Thanks guys.

Last but not least I want to that the people who were kind enough to buy one or both issues of "The Soldier Legacy" or even if you just gave your support in the idea or got a sketch/caricature done. You guys are the ones that make or break me at these events and allow me to keep printing more issues and draw more stories. I hope you enjoy them, and please feel free to post feedback here or hunt me down on Facebook. Positive or negative, I am always learning.


Anyways, a good weekend, now back to work :)
Posted by Paul Mason at 9:13 PM No comments: 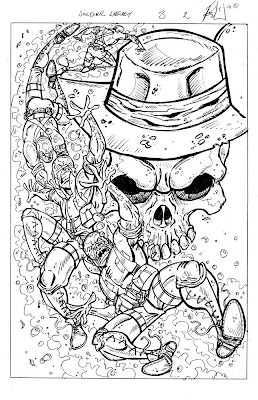 Preview of Splash page for issue 3 (11 pages penciled so far). This page is a poor man's attempt of a Jim Steranko style page- was reading his few issues of Captain America he did while Kirby was looking to move off the book and really like the contrast in visual page layout he had in comparison to then penciler Jack Kirby's more traditional grid layout. Kirby is the favourite but there was a surrealist influence in the signs and symbols Steranko gave to his storytelling images (conceptually diferent). This point in the soldier book allowed for that sort of 'break away' from the more reality based images needed for the story.

Soldier Legacy #2 Is in Store NOW!!

More details soon, brain is fried from typing up the finishing touches on my confirmation paper for my DVA research :Z 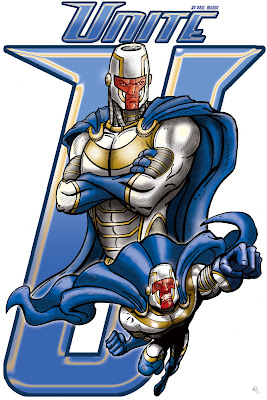 Oh, if you get a chance, head to http://www.talenthouse.com/pmason83 and click on my Superhero submission 'Unite', and help me by voting for my Superhero character for the Stan Lee Foundation competition...I'm getting hammered in the votes :( Oh well, perhaps the character 'Unite' will make it into a future comic book project. Stay tuned
Posted by Paul Mason at 5:41 AM No comments: