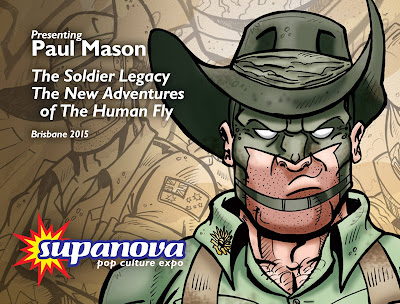 I think I'm resigning to the fact that my blogging will forever be haphazard at best, and they will have as much resonance and response as a note in a bottle thrown into the ocean from an island. But, it's meeting some sort of de-brief function in my head, so I'll share when I think of it. In lieu of forgetting to upload all the kids photos from last month's Halloween ComicFest in store scribbling session at Urban Fiction Comics in Nambour, here's a quick mention of this weekend's nonsense.

The Brisbane Times have been running small snippets of interviews with Supanova guests all month in the lead up to tomorrow's convention. Kudos to them who have to find an angle in a story to draw from, particularly when I was coming off a string of all-nighters marking honours papers for Uni. So I guess I went into exegesis-mode. and wrote way more than was necessary. Thank you to Sam for the opportunity, and apologies for the pages.

And for context, the complete response to the questions provided. Maybe someone might get a tidbit of advice out of the last paragraph.


* What's you favourite thing about Supanova?


Meeting new readers and friends, catching up with old ones, chatting to like-minded folks and fellow creators. That’s more than one thing, but they were hard to separate!

* Were you into comic books as a kid / did you always want to create comics?


I was into comics, cartoons, and movies as a kid; it was really an amalgamation of the three mediums that pushed me towards wanting to create comics. When I think back, I wanted to do “Cartooning”, but I don’t think I knew what that was. So, I just kept drawing. Although I have worked freelance drawing cartoon strips, caricaturing, graphic design, and even some minor animation, I just somehow naturally kept gravitating back towards comics.
Since kindergarten, I loved to draw, and Batman reruns got me into superheroes. Asterix, Tintin and Phantom comics during primary school kept me entertained, while at the same time, Teenage Mutant Ninja Turtles, then Batman, X-Men and Spider-man animated series of the 90s were my favourite shows to watch. Spider-man, Daredevil and The Punisher were the comic books I became obsessed with as I entered high school, but this was all still fueled by cartoons, and whatever action film I could get my hands on. While the other kids liked Ritchie Rich and Home Alone, I loved Terminator 2, Lethal Weapon and Enter the Dragon. I didn’t discriminate- classic Jack Kirby comic books from the 1960s, Hanna-Barbara action cartoons on Boomerang channel, 90s Nickelodeon cartoons, Jackie Chan Hong Kong classics, Clint Eastwood westerns- I was a sponge for this stuff. Though my tastes fluctuated over the years, and the focus from my studies at uni encompassed fine art, animation and a little live action filming, essentially, comic books became the medium I most enjoyed to work with, and postgrad studies allowed me the opportunity to finally cut loose and attempt to do them properly.


* What are your all time favourite comics?


It’s a tough question, I like too many! I more so follow the creators of titles, rather than have individual books that I like. Jack Kirby, Harvey Kurtzman, Will Eisner, Steve Ditko, John Romita Jr, Klaus Janson; have their name on a cover, and I’ll pick it up for sure.  To try and narrow it down, I’d say Jack Kirby’s work on the 1960s Fantastic Four is still the gold standard in old fashioned adventuring, epic scope, drama and dynamic action on a page. But really, there isn’t much of his work that I don’t like; I love his work with Joe Simon in the 1950s (Boys Ranch, The Fighting American), his other work with Stan Lee (the 1960s Captain America run, Sgt. Fury and his Howling Commandoes, The Avengers, The Rawhide Kid), and his solo work for DC in the 1970s (such as O.M.A.C, and The Losers). Eric Powell’s The Goon is a recent favourite, and Garth Ennis/Gordon Parlov’s Fury Max is a book I keep picking up to look at. The most enjoyable comic books I’ve picked up in recent years are from Australian publisher, Gestalt Comics.


* What is the hardest thing about your job?


Fighting “Time”. Comics writing and illustrating, is rarely a “full time” job; there are only a handful of creators in this country that create comics solely for a living. The same can be said for many authors too. The irony is that writing and comic creating demands full-time hours to produce the work at a high standard, but if you were to break down the pay rates of most companies, or sales, verses an hourly rate, minimum wage employment looks pretty attractive…So to live, many creators have more than one job. I have been fortunate to have some income from comics, but also spin the comic creating and visual storytelling into an academic stream with a professional doctorate basis. I have a day job I’m very happy with (lecturing and tutoring at Griffith University QCA), plus other commitments that take up a lot of time. The challenge mentally is being able to “switch on” the brain to be ready to either write, layout, draw and/or ink my comic commitments in the small windows that I am able to get in any given week; at midnight, for instance- which is not always possible physically.
Comics are a solitary activity. Even when you are working on someone else’s script, and under editorial gaze, you’re doing all this remotely, made possible with the Internet. But, as it’s only part of what needs to be done in any given week, it’s a juggling act with my other job, which involves writing lectures, attending classes, marking assessments, answering after hour emails etc. Much of the day means you have to interact with other humans hahaha! Necessities of life which are important to function such as family time, loved ones and, you know, eating and sleeping, become part of that balancing act, which I confess I can struggle with at times, and comics can hog a lot of time in order to do them “right”.


* What is some advice you would give to young comic book creators?


Get your idea down; too many people have an idea, but prefer to talk about it more than actually “do it”. Finishing a comic is more challenging than people realise; it’s easy to kill time by drawing sketch after sketch of your own character, but it’s a lot harder to force yourself to draw a comic panel featuring characters or backgrounds/settings that are important to the story but not as fun to draw. Like any work of art or creative endeavour, it takes a level of commitment and discipline to see it through.
Whether you’re a writer or artist, study your intended craft- draw from life, learn from stories, read books, watch films, listen to people talking, people watch in the city or when you’re out and about, seek feedback from professionals, attend panels, study, apply what you’ve learnt, repeat the process, aim to learn from those that you like and do well, and learn to understand the “how”; how things are made, how things were etc. which can be applied to stories and visuals.
Start small, such as a 2 or 4-page story, then maybe 8, and then 12. Complete those before attempting that 120 page graphic novel idea you may have; it shows you can see something through to the end, and gives you the satisfaction of completing something, without busting yourself from the get go because you gave yourself such a crippling task. You’ll find you’ll learn a lot more, and can experiment with each outing.
Find like-minded creators and friends to support you; part of how I got into comics, and how I continue, is from the support I have from fellow comic creators, indie publishers and printers.
Above all, you need to “do”. You can’t learn to swim by just waving your arms and legs around on dry land- get in the water! You learn through practice, and creating. I never had the answers when I started, and cringe at my old stuff. I’m still searching and learning, and probably won’t be satisfied, no matter who pays or publishes. Onward!

Posted by Paul Mason at 5:07 AM No comments: