Just a quick update as it's very late, and I'm deep in the trenches of Soldier Legacy #4 and the TPB. I have 1 page left to pencil of SL#4, then about 4-5 weeks to colour and finish the book. That's roughly a page a day. Going to be very tough.

‎"Paul Mason's Soldier Legacy - Very impressive and definitely Australian to it's core. Usually genre comics are not my thing but Soldier Legacy whilst inspired by action and adventure comics is not derivative. If this was next to a Phantom comic when i was sixteen i would have flipped my lid. It's full of action and I had fun reading it. Looking forward to more." -John Retallick, The Comic Spot.

Thank you for the kind words, John :D I get a huge buzz when someone comments on the series,particularly when I'm buried in work and wondering if anyone actually enjoys the books for what they are. So thanks again.

The other news came from good friend Jason Franks, creator of McBlack, Sixsmiths, and the editor of Black House Comic's Terra Magazine (http://www.terramagazine.com.au/), who was interviewed this week by Emmett O'Cuana from the international Comics news and reviews site Comic Booked.com about the upcoming Melbourne event 'Big Arse 2'. The event will be launching 15 titles, from heaps of Australian creators, and all Australian publications. Jason has three titles in the launch, more information can be found during the podcast here: http://www.comicbooked.com/comic-booked-podcast-preview-interview-with-jason-franks/ where Jason and Emmett briefly discuss the Soldier Legacy's appearance in the Youi TV commercial (which is still playing! Saw it on 7Mate during the recent Sunday night Rambo movies :D). The website also liked the Blach House Comic's article, and the Ad on YouTube (Thanks Emmett!)

Thank you for the plug too, Jason; I should start paying you as my one-man PR firm!
http://podcasts.comicbooked.com/cbp9-interview-with-jason-franks-on-big-arse-2/


It's rare that I hear anything about the series outside of the Black House crew and the readers at the cons, and as much as I greatly appreciate it, I still value it greatly when a Podcast or Comic news blog acknowledges the work that I'm pushing out into the world. It happen's very rarely, but when it does, I'm very touched.
Posted by Paul Mason at 6:05 AM No comments: 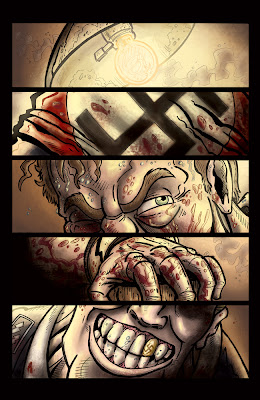 Ok, still searching for a "look" that I want to give this first scene of Soldier Legacy #4, but it's a start. We'll see.

In the meantime, I think I'm about 2-3 pages away from completing the pencils for the issue, giving me roughly a month to colour and letter the book, and prep it for print. So, the very late nights will continue, at least until the first week in April, when I can go to bed at a reasonable time :)

The TPB is just about ready to rock and roll- I'm wanting to put a few pages preview of #4 in there, so there's those pages, plus a possible foreword going in there. Otherwise, it will just be a matter of finalizing the cover/spine (based on the thickness of the book in print), so provided I stick to the schedule, and keep juggling the other tasks (oh damn, Dark Detective #8 in the mix too!), I'm still in the ball park of achieving all this nonsense by the due dates :)

Fingers crossed for me, gotta run,
Paul
Posted by Paul Mason at 12:37 AM No comments: 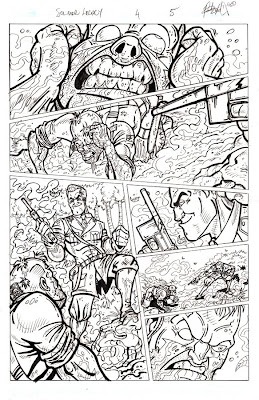 So I figure I've been a little quiet lately, due to the fact that I have several comic projects all due at the same time in March/April, and the unfortunate thing about being a 'one man army corp' in regards to pencils, colours, lettering and assembly, it doesn't leave much time to waffle away endlessly on blogs and social media (though I do manage a little craziness at 3am :P).

So anyway, since one of the books, Soldier Legacy #4, litters my work area floor (17-18 pages of pencils so far), and since I've shown virtually nothing of it (I'd hate to leak spoilers after all), here's a totally out-of-context page from the next issue, that doesn't give too much away (unless you haven't read issue 3, in which case, you may be a little lost ;P)

Anyways, back to it. A post of some more, if not limited, intellectual substance sometime soon :)
Posted by Paul Mason at 11:50 PM No comments: