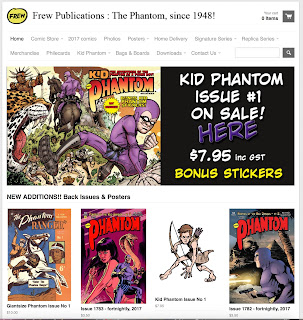 Get the First Issue here: https://www.phantomcomic.com.au/collections/kid-phantom

Thank you for your support! 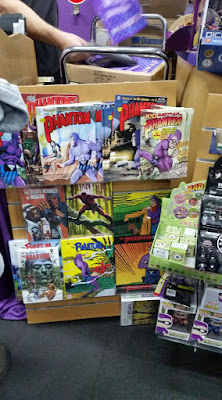 Posted by Paul Mason at 7:40 PM No comments:

Thank you, and looking forward to the return, with Kid Phantom #2 writer Andrew Constant. Very pleased :D
Posted by Paul Mason at 6:33 PM No comments:

Kid Phantom #1 reviews by some little "phans' and a Phantom legend (!)

I just wanted to say a heart-felt thank you very much to the Chronicles Chamber crew (Jermayne, Dan and Steve) for embracing the Kid Phantom concept, and putting together this podcast with thoughts on the book from a wide range of sources. Especially heartening was to hear from all the young kids who read and enjoyed it. YOU were who I cared about liking this book the most, and I’m so happy to hear from you. The older ‘phans’, I thank you too; either for encouraging your kids to read, sharing your love of ‘The Phantom’, or even just digging it and appreciating what it’s trying to do and enjoying the fun; much like my enjoyment of Pixar movies and the like.

So hopefully I don’t spell your names incorrectly, but I’d like to thank Tom, Angus, Jessica, Kye, and Shaun, and also Tristan, Jamie Johnson, Callum, Jules Faber, Trevor, Terry, and of course, thank you for the heart-attack-inducing guest cameos of comedian Sammy J (!) and Phantom comic royalty Sy Barry (!); all of your comments, thoughts and well-wishes filled me with pride and honour, and I’m certain the whole Frew Crew and Henriquez feel the same way. From the drawing point of view, I forget that outside of paying the bills and keeping food in the cupboard for my partner and I, that people would actually have an opinion about my job and my scribbles from the office. Cheers for giving book 1 a chance, including everyone else out there who grabbed a copy or two.

Much like most of the popular characters in pop culture, this is something that while aims to be as inclusive as possible, is primarily a young audience approach, with art direction not unlike the many iterations of characters in animation such as ‘Ben 10’, ‘Batman’ etc. I don’t expect the audience who loves the dark and gritty ‘Dark Knight’ Nolan film is going to show the same love for  ‘Batman in ‘Batman: Brave and the Bold’ for instance, nor do I believe the producers expect them to. I had the good fortune of spending some time with Executive producer James Tucker a few years ago, and he stated the target audience for that cartoon show was “kids, and their parents who remember the bronze and silver age comics.” Basically, giving the opportunity for the parents to share their characters with their children. I see this as being no different to the KP series. Not everything is made for every fan. It can’t be; otherwise, it ends up pleasing no one. As Sammy J kindly points out “The other phantoms are still there, this just adds to the wide variety of stories out there”.

With the help of great Phantom-loving parents (some of which I heard in the podcast- cheers :D), here was something that hopefully allowed the spark of curiosity to grab hold. Thank you, and I hope you enjoy the journey as it unfolds. Come June, you’re in for a treat ;D

Posted by Paul Mason at 6:28 PM No comments:

Join Scott Stephens, host of ABC Radio National's The Minefield, as he leads a panel of writers, journalists and artists in a conversation that explores the rise of the superhero figure in popular culture, and its relationship to contemporary world politics.
Panellists include:

As part of the Opening events of the Marvel Cinematic Universe Exhibition at Queensland Gallery of Modern Art, I'll be speaking at this panel, and trying not to look stupid (tall order).
Cheers!