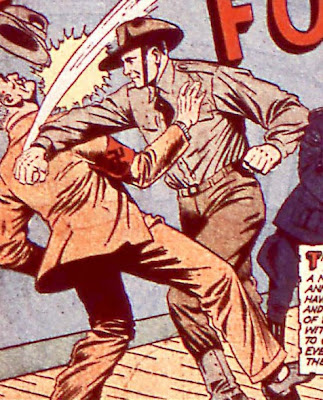 So I'm reading Golden Age Captain America at the moment, and I come across this first (and only) appearance of this Australian Soldier character. Needless to say, I was stunned, as I'd never heard of this Timely/Marvel character before. And once I read it, I saw why :P A nice idea to have an Aussie Anzac Solider represented in what were essentially War time propaganda pieces (and sadly, at this stage Simon and Kirby were no longer working on the title, but consolation prize was Al Avison doing his best S & K riffing), but could be seen by the story that very little to no research was done on the story. Which is totally understandable- realistically, they were virtually young men thrown in the deep end (Stan Lee was fetching coffee for Simon and Kirby merely a year before becoming Managing Editor at Timely)and putting together books at breakneck pace for young kids and US troops to read.

Still hilarious to see the Soldier is talking to his commanding officer at the 'ANZAC headquarters' ;P 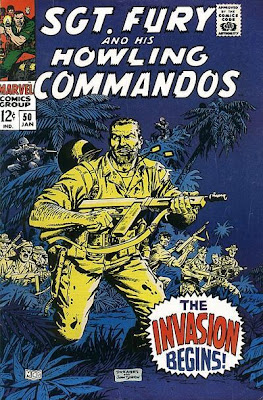 And here's another one, this time written in the 60's and featuring in 'Sgt. Fury and His Howling Commandos' (#49 and 50), and the poor man's 'Howlers'- "Captain Savage and his Leatherneck Raiders" 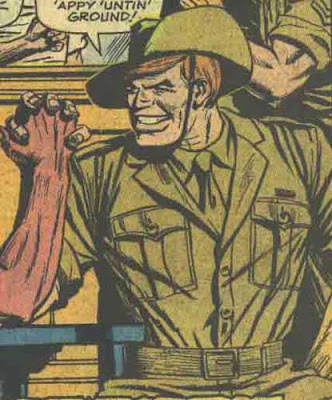 Just goes to show how iconic that Slouch hat really is, huh? :D
Posted by Paul Mason at 6:48 AM